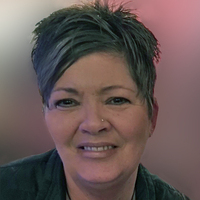 Roxy was born May 5, 1965 in Fargo, North Dakota.  She was adopted as an infant by John “Bill” and Donna (Parizek) MacKinnon, Sr.  After Bill’s death, Donna married Roxy’s “Dad,” David Varty in 1973.  They made their home in Minot and later in Surrey where Roxy graduated from Surrey High School in 1983.  Roxy was united in marriage to Kevin Kelly in Las Vegas, Nevada on May 15, 1992, having just celebrated their 30th Anniversary in May of this year.

Roxy’s first job was at Albertson’s on 20th Avenue, which eventually became Marketplace Foods. She worked there for nearly 40 years and still was employed there at the time of her death. She held a number of positions over the years, most recently serving the company as General Merchandise Manager.

Roxy was an avid bowler having participated in leagues and also played softball for Nola’s Lounge throughout the years.  She loved to spend time in the sun and at the lake with family and friends and she and Kevin enjoyed traveling to their winter home in Mesa, AZ.  Roxy also spent a great deal of time caring for her mother Donna until the time of her death in October of 2020.

She was a member of St. Leo’s Catholic Church and the Minot Moose Lodge.  She had a close relationship with her niece, Krista and loved to spoil her great-nieces Norah and Vida whom she referred to as “her girls.”  She also had a special place in her heart for her pets, Pooky and Tye. Roxy and Kevin enjoyed spending time together with friends, and Roxy was known and loved by many, especially her Marketplace family and customers.

She was preceded in death by:  Her parents and a nephew, Jamie MacKinnon.