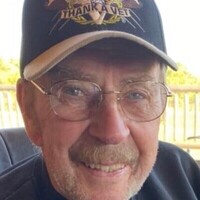 Floyd was born February 19, 1937, in Minot, ND to Adolph ‘Shorty’ and Veronica ‘Verna’ (Griffin) Borud. They lived in Des Lacs, ND, Glasgow, MT, and Williston, ND where he completed the 8th grade.  Floyd shared many stories with his children, but one of the most memorable was, as a child, he made extra money by running meals to young military men stuck on the train in Glasgow, MT, and Williston, ND.

Floyd enlisted into the US Army with the permission of his parents at the age of 16. He served from December 9, 1954 until his honorable discharge on December 9, 1957. Floyd served alongside his brother and best friend, Bob, through basic training at Fort Leonard Wood, MO, in the 554th Infantry, and then with the 801st Aviation Battalion in England where he finished as an E5. They operated heavy equipment to rebuild runways and prepare sites for military operations after World War II.  Some of the places he often talked about were the Royal Air Force Station located near Molesworth, Lakenheath Air Force Base, and Greenham Common Royal Air Force Base.  Another Army story is they were given permission from one of their superiors to use the general’s torpedo car, but they had to take the flag off first.  They used it to get around for a bit from town to town such as Charleston, Ipswich, Sculthorpe, Upper Heyford, and Chicksands.

Floyd was united in marriage to Cynthia Gronseth on November 8, 1958, at the Ray Lutheran Church in Ray, ND.  They made their home in Minot and were blessed with three children.

Floyd worked as an over the road truck driver completing many miles for Midwest Motor Express and North American Van Lines. He continued his trucking career with Behm’s Family Corporation/Power Fuels, first as a transport driver, and then promoted into management as transportation manager, safety director, and transportation marketing.  He was a member of the North Dakota Motor Carriers Association.  He retired in 2000 due to his health. He was finally diagnosed with Whipple’s Disease and received the care he needed to recuperate.  He went back to driving truck for Dakota Midland Grain and started playing music again with his cousin Karen Borud Rath.

Floyd was a member of First Lutheran Church of Minot.  He was also a 48-year member of the American Legion Post 26 in Minot.  Floyd spent many years volunteering for the Norsk Høstfest and the Frozen Fingers Festival. Floyd was a talented musician and, starting at age 11, he traveled far and wide with many bands that included The Borud Family Band, The Pioneers, Dakota Rose, and The Replacements.   He entertained many with his fellow bandmates bringing joy, laughter and love to many afternoons and evenings. Floyd was inducted into the Dakota Music Hall of Fame on May 24, 2012.

Floyd was a devoted husband, father, grandfather, great-grandfather, brother, uncle, musician and friend. He was genuine, loyal and reeled many in with that easy smile. He enjoyed the outdoors fishing and camping at Lake Sakakawea and later purchased and developed a lot near the Red Mike area of the Upper Missouri River.  Floyd also enjoyed casino trips to Las Vegas, New Town, and Mandan with Cynthia and later with his daughter, Vicki, to Laughlin, NV.  He will be missed dearly by all who were blessed to share in his life of family, music and friendship.

Floyd was preceded in death by his wife Cynthia; parents, Shorty and Verna; and siblings, Richard and Robert Borud.

Memorials are preferred to the donor’s choice.