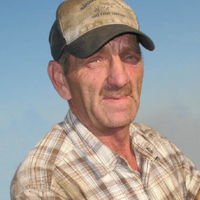 A memorial service will be held at 10:00 AM on Tuesday, September 6, 2022, at Dawson City Hall, with the Reverend Jacob DeBoer officiating. Burial will take place at the Dawson Cemetery immediately following the service. There will be no visitation as cremation has taken place, per Harlan’s wishes.

Harlan Keith Kleppe was born on June 23, 1953, in Bismarck, to Harold and Shirley Mae (Plath) Kleppe. He was raised on the family ranch (Kleppe Hereford Ranch) southeast of Dawson. Early on, Harlan demonstrated a gift for working with horses and cattle. He became a skilled horseman who especially enjoyed working with cutting horses, and he developed a passion for cattle showing while traveling with his dad showing registered purebred Polled Hereford cattle. Soon after graduating from Steele-Dawson High School in 1971, Harlan was hired by Trueblood Custom Cattle Fitting in Kansas. After spending three years learning the “tricks of the trade” of cattle fitting, Harlan returned to Dawson, where he purchased a farmstead a few miles northwest of the family ranch and started his own cattle fitting business, naming it Kleppe Custom Cattle Fitting. As he traveled to cattle shows around the United States, Harlan’s strong work ethic and reputation as an expert in cattle fitting and showmanship of Polled Hereford cattle led to a job offer from Rocky Knoll Cattle Company in Whiting, Vermont, where he became the herdsman in charge of the Polled Hereford show cattle. While working in Vermont, Harlan’s knowledge and skills were further recognized when he received the Herdsmanship Award at the New York State Fair and was asked to speak at an event for the Maine Junior Polled Hereford Association. After two years in Vermont, Harlan once again returned home to Dawson, where he resumed his cattle ranching and organic farming operation. Harlan also engaged in several different business ventures throughout the years, as he became a certified inspector of organic grains in the U.S. and Canada, raised leafcutter bees, and partnered with his brother, Jerry, in a farm labor contracting business, called Kleppe Brothers, for 7 years.

Harlan was a gentle, kind-hearted man who was generous and always willing to help someone in need. He had a good sense of humor and a unique laugh that was hard to forget. Harlan inherited his dad’s quiet, unassuming demeanor, which sometimes led people to underestimate his intelligence, determination, and strong will. Indeed, Harlan was sharp-witted and wise, and those who knew him well laughingly recall the reactions of people who realized their mistake in underestimating his aptitude for the cattle industry or the steadfastness of his convictions. Although he often was a man of few words, Harlan was honest and forthright in his opinions and did not hesitate to stand up for himself, others, and his beliefs.

Harlan was a well-liked and respected member of the Dawson community. Throughout his life, he was actively involved in his community and the Dawson Lutheran Church, where he served on the church council. He liked attending auction sales, where he acquired many “treasures” and delighted in finding a good bargain. Harlan enjoyed holiday celebrations with his family and could always be counted upon to bring the pickled herring! In his leisure time, Harlan enjoyed fishing and playing pinochle, and, in true Kleppe fashion, he was an avid fan of the Minnesota Twins and Minnesota Vikings.

Harlan was a hard worker who dedicated his life to farming and ranching. Thus, it seems fitting that his final moments were spent working in the field, doing something he truly enjoyed.

Harlan was reunited in Heaven with his parents; his grandparents, Karl and Annie Kleppe and Henry and Martha Plath; his sister-in-law, Karen Kleppe; and several aunts, uncles, and cousins.

In lieu of flowers, please consider a memorial donation to Dawson Lutheran Church, Dawson Cemetery, Kidder County Angels, or another organization of the donor’s choice.