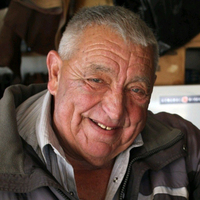 Donald was born in Dickinson, ND on August 9th, 1939, the son of Walt and Evelyn (Connell) Neuens.  He graduated from Bismarck High School in 1957.  He married Mary Ann Fisher on March 17th, 1962, in Bismarck. The couple had a son, Tom and daughter, Suzy.

Donald and Mary Ann lived in Bismarck, where they owned/operated Neuens’ Western Shop until it closed in the year 2000. After the shop closed, Donald opened Neuens’ Tack & Leather Shop in Mandan. He became a talented leather craftsman through the years, a trade he learned from his father, Walt.  However, before Neuens’ Western Shop, shoeing horses was a big part of Donald’s life. He attended farrier school when he was 20 and was known statewide for his ability. He got “under horses” well into his 70’s. A good friend, Sonny Ehr, once said “he is the toughest man I ever met.” Both leather work and shoeing horses, were trades he passed down to his son, Tom.

It was no surprise that Donald loved the sport of rodeo, and was active in the Badlands Pro Rodeo Circuit, where he and Mary Ann acted as president and secretary for seven years. Donald also had a huge soft spot for animals of all kinds, adopting/acquiring three miniature donkeys and even a Clydesdale for a short time, from the Dakota Zoo in Bismarck. He was also known to bring just about any orphaned animal home to raise, even bringing an orphaned colt home in the backseat of his brand-new pickup.

Donald is survived by his son, Tom; daughter, Suzy; grandchildren, Sloane, Savanna and Zack; brothers, Bill (Cathy) and Ken (Christi); his beloved dog, Murphy; and infinite friends and neighbors always stopping by to visit and lend a hand.

He was preceded in death by his father, Walt; mother, Eveyln; wife, Mary Ann; and brother, Gene.