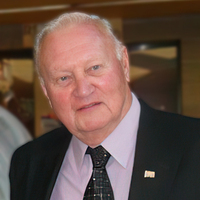 Visitation will be held from 6 to 7PM Sunday with a prayer service starting at 7PM at Parkway Funeral Service, 2330 Tyler Parkway, Bismarck.

Interment will be the North Dakota Veterans Cemetery.

Milton Richard Olson was born to Jacqueline Meissner and Milton Estroy Olson on June 28th, 1932 in Glendive, MT. At six weeks old he went to live with his aunt, Rose Degel and family, in Gladstone, ND where he attended High School and graduated in 1950.

After graduation he moved to Dickinson, ND where he worked until he was drafted into the U.S. Armed Services on July 23, 1952 where he served for two years in the Far East Command. He was Honorably Discharged in July, 1954 and reunited with the love of this life, Patricia “Patty” Gustafson. They were married at St. John’s Lutheran Church in Dickinson on October 7th, 1954. They were blessed with four children: Richard, Ruth, Michael and Kathleen.

His lifetime career was as a Brakeman/Conductor for Northern Pacific and later, Burlington Northern, where he was a Union Officer for UTU and the AFLCIO. He retired after 43 years in 1993 but his life’s work didn’t stop there. His real passion was sharing the love of Jesus. He was involved in ministry at the River of Life Church where he played drums on the worship team. He and his beloved wife Patty helped to facilitate several ministries over the years, positively impacting many people. His love for Jesus was passed on to many in his family who also accepted Jesus as their Lord and Savior.

During his free time, he was a car enthusiast which led him to own many different vehicles over the years and traveling to car shows with his son, Michael. He also enjoyed being on his Pontoon, “The Patty-O,” at Patterson Lake where they lived. Bud was very caring and made friends wherever he went. He loved hosting family and church gatherings, including many Baptisms. He loved music and was a self-taught musician who could play several different instruments but loved his drums the most. He enjoyed traveling in his motorhome across the country with his wife and grandchildren, where they made countless precious memories.

In 2004, Bud found the perfect retirement job. For 10 years he worked alongside his daughter, Kathy and son-in-law, Dave, as a Player Assistant at Bully Pulpit golf course. In 2012, Bud and Patty moved to Bismarck and it was there that they found Evangel church, which became a staple in their lives, continuing the ministry they both enjoyed, helping people cope with life’s problems.

In February 2020, Patty passed away, and in April of the same year he moved to Billings, MT to live with his daughter Ruth and husband Ralph. One year later Bud moved into an assisted living facility where he made many friends and admirers. He started a Bible study for the residents and looked forward to his daily visits from his daughter Ruth, who he lovingly called “his Angel.” Bud was quick-witted and loved to give hugs. One of his favorite sayings was, “Be kind.”

Bud was preceded in death by his parents, Jacqueline Peterson and Milton Olson and his aunt and uncle, Anton and Rose Degel.