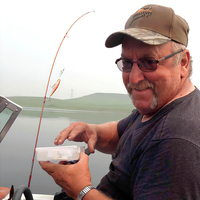 Funeral services will be held at 11:00AM, Tuesday, August 30 at Parkway Funeral Service, 2330 Tyler Parkway, Bismarck.

Visitation will be from 5 to 7:00 PM, Monday, August 29 at Parkway Funeral Service.

Many people knew him as “Mutley”, a nickname given to him many years ago. He was born August 8, 1956 in Linton, ND to Christina (Wolf) and Joseph Doll and was the youngest of four children. He grew up east of Linton by St. Michael’s Church until his family moved to Bismarck in 1969. He continued his education in Bismarck and graduated from Bismarck High School.

He fell in love literally, with the girl next door, and married Donna McCarl on July 1st, 1977. Together they raised twin girls, Kylee and Shyla, at their home South of Lincoln where he and Donna resided up until his passing. When he married Donna, he also gained a special brother- in-law, Larry Ell, who was never far from his side and shared in many shenanigans throughout the years, while raising children of their own who became like siblings.

Mike was a dedicated employee to Northern Improvement Company for 41 years, retiring in 2019. His passion for heavy equipment and work experience over the years made him the go to guy for questions from family and friends. His line of work was instilled in his daughter, Kylee, who became a co-worker to her dad, sharing the same love for operating machinery.

He had many hobbies over the years: trap shooting, organizing fishing tournaments for kids, softball, horseshoes, boating, ice fishing, gardening, canning (pickled watermelon and fish), cooking and listening to Sunday polkas on the radio. He was a member of the Lincoln Sportsman’s Club when his daughters were younger and his love for fishing will live on in them. He loved to go ice fishing where many stories were told, beer was drank, and, let’s be honest, at times not many fish caught! He greatly loved spending time with his fishing buddies on fishing trips. Besides his love for the outdoors, he was a great cook who never followed a recipe! His specialty was making soup and creamed chicken. He was always nominated (and gladly agreed) to make the turkey and dressing for holiday meals. His annual horse radish making at the cabin became a tradition along with making sausage with family each winter where he became the master of smoking the meats! He was also one lucky guy, always winning during annual Deadwood trips with family, playing the lottery, or raffle drawings.

One of his favorite places was the cabin they built in 2003. If he wasn’t in town, he was there! He loved cabin life and recently could be found cruising around on his golf cart visiting all the neighbors! If people were outside, he was stopping to visit! He could start a conversation with anybody! His grandson, Trae, grew up learning from and admiring his “Pops”. They did everything together from working on Trae’s most recent motor vehicle purchases to fishing, and gardening. He had a soft spot for Trae and would do anything for that boy, including regular cash drops to support Trae’s ideas! The bond they shared was very special and the memories will last forever.

He will be dearly missed by all his family and friends.

Mike was preceded in death by his parents, Joseph and Christina.