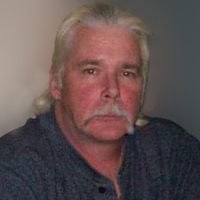 To view a livestream of the service, access: https://www.facebook.com/pages/category/Religious-organization/Zion-Carpio-Lutheran-Churches-111092798991830/

Mike was born November 29, 1962, in Minot, ND to George and Anne (Nelson) Moen. He grew up on the Moen Family Farm and attended school in Carpio.  He graduated from Carpio High School in 1980.

Mike found work in the oil field after high school for a few years as a young man. He enlisted into the US Marines on December 10, 1985, serving his country honorably until his discharge on December 9, 1988, when he returned home to North Dakota. He resumed his career in the oil field working directly on the rigs in a variety of positions and lastly as a security officer for during his tenure in the industry.

Mike was united in marriage to Rebecca Whorley. They were blessed to share a daughter, Amber. Rebecca passed away unexpectedly in 2002.

Mike also owned and operated M&M Painting for many years. He completed many residential and commercial jobs throughout North Dakota; no job was too big or small, he even enjoyed staining!

Mike made his home in many communities during his life. He lived in Burlington, Carpio and Dickinson until returning to Minot recently to be near his children and grandchildren.

Mike was married to Debra Schell in 2005. They watched their family grow over the years.

Mike enjoyed deer hunting in his younger years, enjoyed drawing and writing poetry. He was entertained by professional wrestling on television and was a top finisher at some local arm wrestling events back in his younger days.

Mike was a baptized and confirmed member of Carpio Lutheran Church. He treasured most the time spent with his family and grandchildren in his later years watching them grow.

A full obituary will be posted when completed by family.