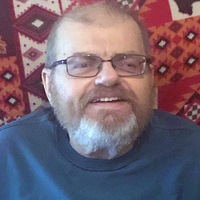 Rodney was born on June 11, 1956 in Rugby to Earl and Dorothy (Volk) Solem. The family lived in Rugby until Earl’s job, with Red Owl grocery stores, took them to Jamestown, ND. He graduated from Jamestown High School 1974.

Rodney started his lifelong career in the grocery industry in 1975. He began in the produce department of Earl’s Red Owl of Rugby, his father’s store. Rodney continued with the store for the next 11 years working his way through many of the departments, eventually becoming manager of the meat department. Not only did he have a great knowledge of the store he brought much to the aesthetics, Rodney was known for painting and drawing very elaborate signs and window displays to advertise sales in the store. After the close of the Red Owl Rodney moved across the street to Leever’s Grocery Store where he would continue his career until his retirement. He loved his job and managed to work the last few years while battling illness, it was due to these health issues Rodney moved to Minot.

Rodney had many hobbies and passions throughout his lifetime. He was an accomplished musician teaching himself how to sing, play harmonica, guitar, and organ. Theatre was another favorite pass time not only did he enjoy attending he held an active role in the Medora musical, where he played a bartender. This went along with his love of reading westerns and being a member of SASS (single action shooting society) a group of six shooter, quick draw enthusiasts. In the group he was known as “Lazy Eye Rod” and when dressed in his best cowboy attire would look right at home on an old west most wanted poster.

Rodney dressed up not only for his quick draw shoot outs, but for every Halloween possible. He loved getting all dressed up and was creative at his own costume designs.

Besides competing for the fastest gun in the west Rodney enjoyed shooting in general, hunting, fishing, cooking, and riding his Harley. He was a member of Harley ‘Hogs’ Owner group and would ride as often as he could. In his down time Rodney liked watching movies, horror and sci-fi being among his favorites. He was also a member of the praise and worship team at the Restoration Ministries of Rugby where he sang and played guitar. Rod was such a soft-spoken kind individual with the biggest heart. Rod was loved by all who had the privilege of knowing him and will be missed by his family and friends.

Visitation: One hour prior to the start of services.

Memorials are preferred to the charity of your choice.