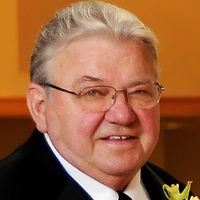 He was born on October 25, 1943, to Walter and Theresa (Skalsky) Gietzen on the family farm near Glen Ullin, ND.  He graduated from Glen Ullin High School. He went on to further his education, earning an Associates Degree from NDSCS, Wahpeton and a Bachelor Degree in Biology from Dickinson State College. In 1969, he graduated from the NDSU College of Pharmacy. On August 24, 1968, Doug married Deborah Diederich at St. Johns Church, Wahpeton.

Doug began his professional practice in Minot, North Dakota, working at White Drug and B&B Pharmacy until finally starting with Trinity Hospital Pharmacy in 1974 where he would faithfully devote the remainder of his professional career. He became the Director of Pharmacy at Trinity in 1998. He worked there until retiring in 2007. In 2017, he was the honorary convention dedicant at the ND Pharmacy Convention to recognize his years of service to the profession. He and Debbie moved to Mandan in 2018, where they would attend the grandkids activities ranging from hockey and dance to everything in between.  No words can describe how much his grandchildren meant to him.  They were his world!

Doug is well known for his sense of humor, big smile, and genuine laugh. He was active in the Hockey Boosters and the Blue Line Club, both in Minot.  In his spare time, he liked to cook gourmet meals and was a skilled butcher, having carved many roasts and steaks at the Gietzen family farm. He enjoyed bowling, golfing and getting his hands dirty in the workshop. He also liked fishing and spotting deer through a scope while observing others trudging through the hostile North Dakota elements. In these last few years, he really enjoyed going to the A7 Ranch, south of Mandan, with his son-in-law, Duncan, where he scoped out deer and spent time outdoors. While in Minot, they were members of St. John’s Catholic Church.

He was preceded in death by his parents, Walter and Theresa Gietzen and his brother, Darrel Gietzen.