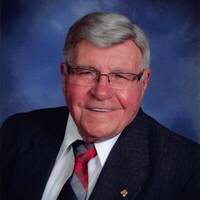 Please use this link to view the service livestream.

Henry was born in Napoleon, ND on March 5, 1931 to John J. And Theresa (Schmidt) Richter, the third eldest of 10 children.  When Henry was very young, his family moved to a farm south of Menoken, ND. Where as a young boy, he helped with all things farming.  He attended Crosier Seminary his freshman and sophomore year before having to stay home on the farm and help his father.  At age 18 he took on a job with Capital Electric Coop in order to get electricity to their homestead.  On May 24, 1950 Henry met his wife to be at a wedding dance and on October 16, 1951 married the love of his life, Lorraine Nagel.  They started their new life together, making their home in Bismarck.

Henry spent years working for Northern Improvement during the summer months and in the winter months, sold WearEver cookware, where he excelled as a top sales person in the company.  In 1961 Henry embarked on a new career that was of great pride for him.  Being a State Farm Insurance Agent, his personal motto was to “always take care of the peoples needs.”  His insureds were like family.  Over the years, Henry’s agency grew to be one of the largest in the region.  He received numerous awards and recognition throughout his State Farm Career.  His office was a family affair, with children and grandchildren working and learning the business of insurance.  Henry retired in 1994 and his legacy at State Farm Insurance continues today.

In Henry’s spare time, which wasn’t a lot during his working years, he enjoyed fishing and hunting with his son’s.  The family spent many wonderful weekends at their cabin at Lake Isabel.  Pinochle was a mainstay at the Richter home, playing and teaching the game to grandchildren.

Henry’s love of God and being a faithful servant, was evident in his many charitable givings, always putting others before himself.

Henry was preceded in death by his wife, his parents, brothers Victor and James and sister Madonna Silvernagel.

In lieu of flowers, donations can be made to the Corpus Christi Rectory and Parking Capital Campaign or Home on the Range.