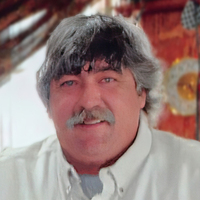 Following the service, all of Tony’s family and friends are invited for a time of fellowship at the American Legion in Butte, ND.

Burial will take place at the Kief Cemetery.

Tony was born on May 30, 1962, in Minot to Tony Sr. and Irene (Mock) Volochenko.  He was raised on the family farm near Kief, ND and attended school there until seventh grade when he moved to Minot and graduated from Minot High School. Tony had all sisters and they nicknamed him “Beaver” as he was always as busy as a beaver. Being a mechanic was something Tony learned from his dad and perfected on his own.  He fixed up his sister’s cars, restored a Model T and did work on his own cars which he enjoyed driving in demolition derby’s and then fixing them back up again.

Following graduation, he moved to Indiana, where he worked for just under ten years. In 1992 when his father passed away, he moved back to the family farm near Kief.  Tony then did some hobby farming, helped his cousin and other family members on their farms and in between worked at the Wescon Refinery and doing carpentry work.

Tony was a simple man and could make something new out of something old.  He enjoyed hunting with his buddy Mike, ice fishing, gardening and canning.  Gathering for holidays, fires with family and friends and grilling, were also some of his favorite things to do.  Tony and his companion Sandy Pfenning spent many years together and he taught her how to mend fences, ride a mower, shoot gun and enjoy the evening nights and starry skies. He often looked toward Sandy’s father Jerome for advice and visiting with her mother Violet, always leaving her with a smile on her face.

He is survived by his companion, Sandy Pfenning and family, Bismarck; sisters, Lillian Latimer, Hazen, Debbie Ohlhauser and Marcy McNair, both of Minot; He is also survived by one uncle, two aunts and several nieces, nephews and cousins.

He was preceded in death by his parents, Tony Sr. and Irene Volochenko; sister, Luella Burlison and three brothers-in-law, Lyle Latimer, Rick Ohlhauser and Ray Burlison.