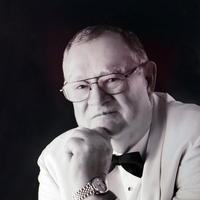 Norman Batterberry passed away on August 21, 2022.

He graduated from Tuttle High School in 1951 and Jamestown College in 1955 with a Bachelors degree in History and Physical Education. Norman attended college on a full Academic, Baseball, and Basketball scholarship. He later went on to receive his master’s degree in educational administration from the University of North Dakota.

Norm was drafted by the Pittsburgh Pirates and the Baltimore Orioles. When his baseball career ended, he continued to play softball until he was 86. He was a lifelong fan of the Dodgers whether they played in Brooklyn or Los Angeles.

On August 21, 1955, Norm married his best friend and high school sweetheart, Fern Marie Biech. He passed away on what would have been their 67th wedding anniversary. Norm was just shy of his 89th birthday.

His love of teaching and coaching took him to Streeter and Steele, ND before moving to Max, ND where he served as Superintendent of Schools for 29 years.  After 41 years in education, Norm retired. He was later called a “legend” for his continued length of service as a superintendent in one school district and for being in education for over four decades.

Norm and Fern loved to travel with Marsha and Shawn along with their respective spouses and family. Their travels took them to over 40 countries on five continents. China, Egypt, Russia, and Peru were just a few of their favorite places they experienced together.

Norman was a very kind man who was often called a “gentle giant” for the respect and caring that he gave to all that knew him. He touched many lives both in and out of the school environment. “Mr. Batterberry” always made time for former students and graduates and enjoyed catching up on their lives once they had left school.

Above all, his real joy was being with Fern and his family. They were his priority in life. Norm and Fern would always end their letters with “Life Is Good.” Norm had a great life with a loving family.

Norman is survived by his wife, Fern, of Garrison, ND and his two children and their spouses, Marsha and Richard of Glendale, AZ, and Dr. Shawn and Linda of Castle Rock, CO along with his three grandchildren, Roman, Rutger, and Rio all from CO. His brother DeWitt and Marlene from West Fargo, ND and his sister-in law, Maureen, from Moorhead, MN also survive him along with numerous nieces and nephews.

He was preceded in death by his parents, John and Pearl Batterberry and his brother, Darrell.

He was greatly loved and has left a large hole in his family and community. We love and miss you dearly. Fly high on the wings of angels.