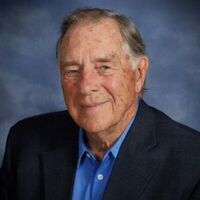 Paul was born on January 8, 1924 in Voltaire, ND to Francis and Elizabeth (Grossman) Bodine. He was raised and educated in Voltaire, graduating from Voltaire High School in 1942.

He enlisted in the U.S. Army at age 18 in 1942. He started off with basic training at Ft. Snelling, MN, then specialized training in the Air Corp at George Peabody College, TN, then on to cadet training in Montgomery, AL. While in the Air Corp, Paul flew the PT-17 and the B-25, ferrying planes from the east coast to the west coast. Paul ended his military career with glider training in NC, where he would have flown medical personnel to Germany during the war, however, news of the atomic bomb ending the war resulted in his honorable discharge in Oct. 1945.

Following his discharge, Paul remained in the reserves and returned to North Dakota enrolling at Minot State University for one year until transferring to Notre Dame University and graduating in January, 1950 with a degree in Economics. Paul returned to Minot and began employment at First National Bank and then as an accountant at Firestone Tire Company.

Paul was united in marriage to Deborah Jacobson on May 12, 1951 in Michigan. They made their home in Minot where he was employed at Reiten Television and Radio for 30 years. He retired as comptroller in February, 1990.

Paul was a member of Little Flower Catholic Church, Minot, where he was involved in the Parish Council and a member of the Holy Name Society. He was also a member of the Knights of Columbus, American Legion, YMCA and PTA. He was a past member of the Eagles, Elks, Exchange Club and Toastmasters.

Paul enjoyed playing softball, golf, and baseball in his early years, especially with his Velva baseball team and the KX softball team. He continued on to golf regularly and attended the Y diligently with his brother Bill up until his passing. He loved to garden and work in his yard. He never met a tree branch too high for him to cut down, much to the dismay of his children. There was never a dull moment at the Bodine house as he was always surrounded by his large family and friends.  He never missed sending out a birthday card to all of his children, grandchildren, and great-grandchildren, each containing a personal message.  Sports were a large part of the Bodine family. You could always find him at a football game or a basketball game. He never missed a Notre Dame, Vikings, or Twins game. He was excited to host the 2022 Super Bowl with his brothers at his home.

Paul was very faithful and involved in the church.  He worked in the office with collections and ushered up until his last couple years.