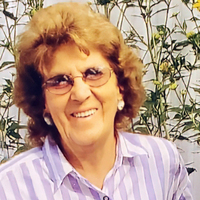 Burial will be held at Fairview Cemetery.

She was born Edna May Gruenberg on March 9, 1931 at their family home in rural Underwood, ND. She was raised and educated in Underwood. On April 14, 1948 she married Charles Butz at First Lutheran Church in Bismarck.

Along with being a homemaker and raising their six children; she had lots of hobbies and jobs. She certainly did her share of painting. Along the way there was café work in the early years, housekeeping for a few families in Bismarck, she spent a few years doing full-time daycare for her granddaughter Kayla Koth, she relished those formative years. One of her favorite jobs in Bismarck was at the Sprout Factory. She was a member of the Amvets Auxillary in Bismarck. Her hobbies included gardening, birds, baking, cooking and canning.

Charles and Edna moved to Bismarck in 2014 where they have resided until her death.

She is survived by her husband, Charles; children, Charles Jr. and Marie Butz, Linda and Chuck Paul, Karen and Daryl Holmes, Ron and Joanne Butz, Lori and (Allen/Butch) Koth, and Ken Butz; 13 grandchildren; 11 great-grandchildren and many nieces and nephews and a multitude of friends she made in her life.