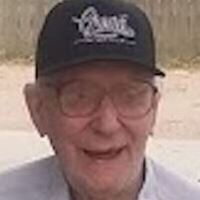 To view a recording of the service access: https://www.mtmsales.net/thomas

Howard Stavem left this earthly world on Thursday, August 11, 2022 taking a kind and old soul that has touched many along with him.

Howard was born Ben Howard Stavem on the farm near Mohall, ND in Cutbank Township on Aug 19, 1926 to Oliver and Alma (Swanson) Stavem.  He was the oldest of three children.  His little brother, Raymond, died in 1936, so Howard learned loss early.  He grew up in the Depression when times were hard, on the banks of the crick of Cutbank Township. He was a patient, unselfish man who demanded little, but gave much of himself.  He had a strong sense of loyalty and duty, and a great sense of humor and a sharp wit. His large smile lit up many a room, while teasing his children and grandchildren with funny one-liners. When things were bad, his response was “Aw, geez”.

Howard started Diesel Mechanic School through correspondence, but had to quit when the farm needed him more than school.  One of his duties was to drive his sister, Elinor, cousins Donald and Delores Stavem and neighbor kids  to school every day with his bay horses, Prince and Babe,  pulling the sleigh or sometimes the stonebolt.

He was drafted three times, but refused by Uncle Sam due to flat feet all three times.  He was a boxer, ice skating racer, accordion player, and quite the dancer in his younger days. Other loves were horseshoes and cards, which he was quite good at. His tall lanky frame and easy smile were never hard to spot.

Howard worked at the Cook and Keup Turkey Farm for years, and farmed in Mohall until 1969, when he moved the family to Minot.  He worked for various companies in Minot, including Morris Rod Weeder, Muus Lumber, Gulf Gas Station, Aasen Sodding, the College Garage and assisted his wife with the operation of J & M Adult Foster Care for five years.  He finally retired in 2000 at the age of 74.

He always gave more than necessary at his positions, and was a much valued employee, especially at the College, where a co-worker got him re-instated after his position was eliminated for financial reasons. 50 years after he left one position, the son of the owner remembered his father talking about Howard’s loyalty as an employee.

He always came to the rescue when his kids needed him, and was not one to chastise when they made mistakes. Howard enjoyed playing cards with his children, teaching them strategy and math, or making music with the little family band. He noticed the small things, like the color of ink on a Christmas card and the name of the paper boy from long ago.  Many of his children’s friends remember Howard giving them a hand up, such as a pair of work boots, a ride to work, or a place to feel safe.

His kindness and patience was more readily observed when dealing with his animals.  Horses were his first love, and he continued this throughout his life.  Animals gravitated to him naturally, as did small children.  There were always squirrels, turkeys, birds and even deer at his Minot residence. He even had a pet badger at one point.

The man was a gentle giant to his own children, and even named a hero by one grandchild. He taught all three of his daughters how to drive a car the same day. Patience!

His friends were of many years standing, and loyalty was just one of his many fine traits.  He left behind big shoes, with big impressions.  Giving his last dollar, his lunch, or his time, there will be a void where Howard once was on this earth.

On Dec. 18, 1951 Howard married Carol Myler from Douglas, ND in the Zion Lutheran Church in Mohall.  The couple went on to have six children, and moved to the family farm where they lived for the next 18 years.

Visitation and viewing will be Tuesday evening at Thomas Funeral Home from 5pm to 7pm.

A Celebration of the Life of Howard Stavem will be held at the Apostolic Faith Church in Minot on Wednesday, August 17th at 11am. Immediately following the memorial, Howard will be laid to his final rest beside his beloved Uncle Ole in the Mohall Cemetery. A luncheon and fellowship will be served at the Paragon Cafe in Mohall for family and friends upon completion of the graveside service. To view a recording of the service access: https://www.mtmsales.net/thomas