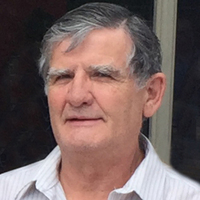 To view a recording of the Vigil & Mass of Christian Burial access: https://www.mtmsales.net/thomas

Tom Widdel, 77, lifelong Minot resident, passed away on Sunday, August 14, 2022 in a Minot hospital. His loving family was at his side.

Thomas Jeffery Widdel was born on October 29, 1944 in Minot, ND to John “Earl” Widdel and Angela (Gefroh) Widdel. He was raised and educated in Minot, attended St. Leo’s Grade School and graduated from Bishop Ryan High School in 1962. As a boy, you could find Tom helping at Widdel’s Bakery in Minot and Kenmare. In high school, he was a standout wrestler and football player and managed the family pizza business, Tony’s Pizza, located on South Broadway in Minot. After high school, he joined the Army National Guard and did his basic training at Fort Leonard Wood, Missouri. He was honorably discharged in 1963 as a Sergeant and had earned his sharpshooter designation.

Tom met Nancy (Luedke) Collins in the spring of 1963 and in 1964 when Nancy moved to California he drove all night to return her to Minot and they married in 1970. They were the proud parents of two sons: Chris (1971) and Jeff (1972). During this time, Tom became a real estate agent in Minot while continuing to manage Tony’s Pizza. Tom was a man of many talents and moved on to become an oil field engineer for Baroid in the 1980’s and then transitioned to the construction industry where he and his son Jeff worked for Real Builders. Tom earned a Management Information Systems Degree at Minot State University in 1997, graduating the day before his son, Jeff, graduated from the South Dakota School of Mines. He worked briefly in that industry before establishing, with Dale Nesdahl, Plumb/Square Construction in the late 1990’s. Later, he and his nephew Shannon Straight worked together on various construction and remodeling projects. He retired from the construction business until the Minot Flood of 2011 which led to him rebuilding his childhood home that he had been residing in since his parents passing and helping family members with various flooded home projects. Also, starting in the 1970’s, Tom helped the Straight Family with their concession business. He loved “selling hotdogs” with family members including his sons, nieces, nephew, and friends.

Tom’s hobbies started early in life with helping at the farm and learning to deer hunt. Later in life, he enjoyed deer hunting at the Widdel Farm south of Minot with his sons, cousin Dick Charlebois and Dicks daughter Andrea as well as with his brother Jack and nieces and nephews. Tom was a lifetime and charter member and organizer of the North Dakota International Chili Society. Tom loved watching his kids participate in sports and he was a huge supporter of his grandchildren: Jacob, Adisynn, Angela, and Sophia in their sports and activities. They could always count on Grandpa cheering for them from the stands and he always commented on how proud he was of them. Tom enjoyed hosting parties at “the big house” on Burdick where you could find him making pizza, tamales or deer sausage.  He proudly taught anyone who would listen how to properly make them the “Widdel Way.” He always made sure no one ever left hungry or empty handed. Tom sang in The Minot Chamber Chorale for over 20 years and loved the socials and dressing up for the Renaissance Feast. During Tom’s life he enjoyed skiing and playing pool with his son Chris for many years. Traveling to Prior Lake, MN to see his granddaughters: Sophia and Angela, son Jeff and daughter-in-law Desra was something he always looked forward to and taking the train was his favorite way to get there. One of the things his family will always remember is his love for Christmas and spending it with his family was very important to him.

Tom impacted many people throughout his life, was very frugal but giving as evidenced by his interest and involvement in the Lord’s Cupboard Food Pantry.  He will be missed dearly. Our family wishes to express our deep appreciation to each of you who have been so kind to us. We are particularly honored by the love and kindness you have given to him and to us at this time.

Tom’s loving family includes his sons: Chris Widdel of Minot and Jeff (Desra) Widdel of Prior Lake, MN; grandchildren: Jacob, Adisynn, Angela and Sophia; siblings: Jack (Yvonne) Widdel of Bemidji, MN and Judy Straight of St. Paul, MN and several nieces, nephews and cousins.  He was preceded in death by his parents and brother: Tim Widdel.

To view a recording of the Vigil & Mass of Christian Burial access: https://www.mtmsales.net/thomas