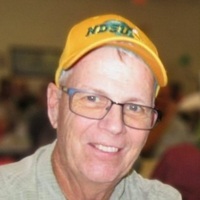 Daniel Hove Hagemeister of Bismarck passed away at his home, with his family by his side, on August 6, 2022 at the age of 73.

Dan was born on September 16, 1948, in Fargo, ND to Maurice and Ella (Hove) Hagemeister. Dan grew up on a farm near Argusville, ND where they raised registered Hereford Cattle.  As a member of the Rush River Livestock 4-H Club, he enjoyed showing cattle at 4-H Achievement Days and the North Dakota Winter Shows.  Dan graduated from Argusville High School in 1966, following high school he attended NDSU.  Dan enlisted and proudly served the North Dakota Army National Guard and North Dakota Air National Guard and was honorably discharged in 1978.

Dan married Shirley Hodgson on September 17, 1971, at St. Mary’s Cathedral, Fargo, ND. Dan and Shirley lived on a farm near Arthur and then settled in Center, ND in 1980.  Their union blessed them with three wonderful children Danielle, Jason, and Travis.

Dan began his 32-year career with Minnkota Power as a laborer and advanced to the position of plant maintenance mechanic. During his time at Minnkota he was a member of the IBEW Local 1593. He served as a Union Steward and was voted to the position of Union President for the Minnkota Unit. He carried on his service within the community as a City Councilman in Center for 18 years and was a member of the American Legion.

Dan enjoyed sports, whether he was playing or watching from the stands.  He played basketball, softball, darts, golf and enjoyed his early morning pinochle games with the boys.  Dan was an avid fan of the Green Bay Packers and NDSU Bison.  He took great pleasure in watching his children and grandchildren in their sporting events and school activities.  One of Dan’s favorite hobbies later in life was to drive his yellow Can Am Maverick side by side with friends in the mountains of Arizona.

Dan cherished spending time with his family and friends. He was a kind and gentle man who had a genuine appreciation for life.  No matter who Dan met he always greeted them with a smile and ended their visit with “Have a good day!” Dan and Shirley enjoyed being the campground hosts at Ft. Lincoln State Park from 2008-2014. He always lent a helping hand ensuring campers enjoyed their stay, making many new friends. Dan looked forward to spending his winters in Arizona and summers at Lake Audubon.  Dan and Shirley loved to travel which led them to visit Lambeau Field, Norway, Alaska, the Panama Canal, Hawaii, and a 50th anniversary trip to Nashville.

He was preceded in death by his parents Maurice and Ella Hagemeister, brothers, Alan and Wayne Hagemeister and sisters, Carol and Lois Faye Hagemeister.