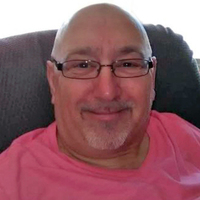 Jack Johnson, 64, of Minot lay down to rest and was called to his heavenly Father’s side on August 2, 2022. He had been struggling with a hereditary heart condition and diabetes for many years.

Jackie Albert Johnson was born on January 2, 1958 at Trinity Hospital in Minot, ND to Harlan and Ramona (Degenstein) Johnson. He was followed in 1959 by a sister Jodi and in 1965 by another sister Julie.

Jack was raised in the Kings Court area west of Minot, in the house his parents built.
When he was a toddler he bumped into everything around him, earning him the nickname “Bumper” that has stuck with him his entire life. He attended grade school in a little white schoolhouse called Harrison before attending Des Lacs High School where he graduated in 1976.

Jack met the love of his life Kevin McKinstry on July 5, 1983 at an Independence Day celebration and they have faithfully remained side by side until the very end. Jack and Kevin were legally married at the Ward County Courthouse on July 18, 2016.

Jack had several occupations before finding his true calling in life as a baker. He worked at the Donut Hole and was the bakery manager at Oak Park Piggly Wiggly. He and Kevin moved to Reno, Nevada for a brief time before coming back home to Minot. He found his forever job at Edgewood Vista Retirement Home in 1998. He was in his element there, and especially enjoyed dressing up for Halloween, singing Karaoke, and entertaining the residents on a daily basis.

He collected roosters, Pillsbury Dough Boys, antiques, and his favorite was Frankoma Pottery. He was a proud partner in the LGBTQ+ movement and society helping change to come from within. He mentored and counseled many young men and women who were struggling which led to many life-long friendships.

In 1992, Jack fell in love again, this time with his niece Katie and again in 1999 with his other niece Emily. Uncle Bumpy is also their Godfather in the Catholic Faith and promoted their faith formation and encouraged their devotion. His love for these girls showed every time he spoke of them. Because of his positive influence and guidance he helped them turn into the wonderful young adults they are today.

Jack especially enjoyed going second-hand shopping, garage sales, Karaoke, flea markets, and auctions. A favorite weekend excursion included Mi Mexico for lunch. He went to church on Sunday mornings with Julie and then spent the rest of the day with his mom. His weekends were very important to him.

Bumper is so very loved by everyone who met him. He was a natural comedian who could make anyone smile and laugh. He is going to be missed by everyone who ever called him friend. Bumper will always be with us because his light can never be diminished by distance or time.

Interment will be later in Rosehill Memorial Park – Minot.