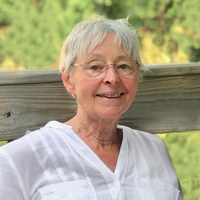 Bernadette (Bernie) Glatt Wagner, age 76 of Bismarck, joined her beloved son Bradford in heaven on August 2, 2022. Bernie had a love of life, treasured time spent with family, was a loyal friend to many, and enjoyed the beauty of nature. She was determined to enjoy this beautiful life for as long as she could, but found peace in the promise of eternal life, even greater beauty and perfect love.

Bernie’s sister Bettie recently commented that she has never known anyone with more friends than Bernie. Friends were attracted to Bernie’s adventurous spirit (she learned to rollerblade in her 50s), energy and love of life. She was also admired for her tenacity and strong will.

Bernie was born January 22, 1946, the twelfth of fourteen children, to Roy and Theresia (Kambeitz) Glatt south of Napoleon on the family farmstead. At age 19, Bernie and Ken Wagner gave birth to a beautiful baby boy who was adopted by a loving family. They raised Kim, Brad, Kirstin and Kyna in Bismarck. In 1993, they joyously introduced firstborn Paul Nichols to the family.

After farm school, Bernie spent two years of schooling at St. Francis Academy in Hankinson, ND while she considered becoming a nun. She graduated with honors from Napoleon High School and Capital Commercial College in Bismarck. Bernie and Ken owned the Coast to Coast Hardware Store from 1972 to 1987. After closing the hardware store, she worked for her brother Jim at Kroll’s Kitchen for a few years, followed by the State Tax Department, in-home caregiving, and most recently enjoyed working as a ND State Legislative Assembly employee. Bernie was admired for her strong work ethic.

An outdoor celebration of Bernie’s life with Pastor Tottie Lenerville officiating, followed by a luncheon, will be held at 10:30am on Monday, August 8. Lady J’s Club & Catering (Bismarck Municipal Country Club), 930 N Griffin St, Bismarck, ND. There will be a live stream available for viewing on Bernie’s obituary page at Eastgate Funeral Services, Bismarck, North Dakota.