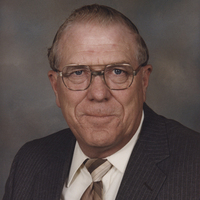 A livestream of the service will be available by accessing www.firstlutheran.tv

Wesley Leland Jenson was born on August 26, 1931 in Granville, ND to Oscar and May (McFarland) Jenson.  He was raised in Granville and Minot and attended school in MInot.  As a 16 year old, he began his railroad career as a member of a “Track Gang” with the Great Northern Railroad.  Wes enlisted in the U.S. Air Force on September 26, 1950.  He served in the 463rd Air Police Squadron during the Korean War prior to his honorable discharge on September 25, 1954.  He spent considerable time in Libya and received  the Good Conduct Medal and National Defense Service Medal.  Following his discharge he returned to Minot where he resumed his career with the Great Northern Railroad.

Wes married Ramona Cleveland on October 14, 1955 at First Lutheran Church in Minot.  They made their home in Minot where he progressed through the positions of Clerk, Chief Clerk, Foreman of the Freight House and Assistant Trainmaster.  He retired in 1991 as the Trainmaster for the Burlington Northern Santa Fe Railroad at Gavin Yard in Minot.  Ramona died on April 4, 1984.

Wes married Shirley Grabinger Bergo on April 20, 1985 at First Lutheran Church in Minot.  They continued to make their home in Minot prior to retirement, and then at South Padre Island during the winter months and at Van Hook on Lake Sakakawea during the summer months.

Wes was a member of the Minot American Legion, Elk’s Lodge and NoDak Race Club where he served as Secretary-Treasurer for several years and was awarded a lifetime membership..  He especially enjoyed pheasant hunting, fishing and watching old western television shows and movies especially “Gunsmoke” and “The Rifleman”.

Celebration of the Life of Wes Jenson:  Thursday, August 4, 2022 at 11:00 a.m. in First Lutheran Church – Minot.  A livestream of the service will be available by accessing www.firstlutheran.tv

Interment will be in Sunset Memorial Gardens – Minot.

Memorials are preferred to the donor’s choice.