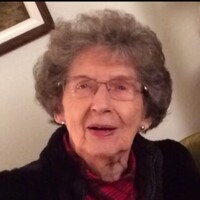 Burial will be held at Sunset Memorial Gardens.

Frances was born on March 9, 1925, to John and Caroline (Heer) Kiemele. She was raised on the family farm east of Hazelton and was the oldest of four siblings.

Frances attended a country school for eight years, high school for four years, and graduated in 1943 from Hazelton High School.

In 1946 she received her nursing degree from St. Alexius school of nursing in Bismarck. One of her first jobs was as a Red Cross nurse during the construction of the Garrison Dam.

She then moved to California, taking a nursing position in the San Francisco Bay area.

Frances enjoyed traveling. She visited Malta, The Philippines, Australia, and lived in Saudi Arabia for six years, then returned to California.

She and Ed were married in California on November 26, 1971, and resided in Galt, CA. Following Ed’s death in 2014, Kim moved to ND to be near her sister, Florence and family. Kim moved into Edgewood Vista Retirement Home in Bismarck.

She was loyal and protective of her family and cherished them greatly.

She delighted in her relationship with Jesus Christ, her Lord and Savior.