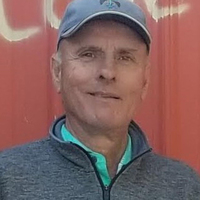 The service will be live streamed and can be found by clicking this link https://www.youtube.com/watch?v=aI11ooDIIS4

A funeral will be held at 11:00 am on Thursday, July 28, 2022 at First Lutheran Church, 800 N 7th Street, Bismarck.  Visitation with the family will be at the church an hour prior to the service.  Lunch will follow the service, then interment at Fairview Cemetery.

Evan was born on June 14, 1948, to Evan E. and Elsa Lips, the first of their three children.  He attended Bismarck Schools, graduating from Bismarck High in 1966, and went on to graduate from the University of North Dakota in 1971.  He was a gifted athlete and played basketball, primarily, also running cross-country, and playing Legion Baseball.  Eventually, he played on city league fast-pitch softball and basketball teams and was an excellent golfer.

One thing that was remarkable about Evan was his memory for all things sports.  He had such an ability to relate stories about memorable moments in basketball or baseball games.  It was truly a passion of his.  He followed the progress of his alma maters’ teams and never did call the UND team the Fighting Hawks – it was always the Sioux!  He managed to stay in touch with several his old teammates over the years.  Everyone seemed to enjoy his pleasant personality.  Something that he was particularly honored by was an invitation to participate in a national pro-am seniors’ basketball tournament that was held in Portland, Oregon in the later 1990’s.

After graduating from college, Evan returned to Bismarck to work in his father’s business, Murphy Insurance.  His aunt, who was the office manager, always gave credit to him for being good at what he did as an agent there.  Eventually, he left to work at a business he and his wife had purchased, The Grinder restaurant in south Bismarck.  It involved some long hours, dealing with the food prep, baking the buns daily, and all.  When the business was sold, he decided to work the seasons, working at the pro shop at Thunderbird Golf Club in Palm Desert, CA in the winter and his own yard care service in Bismarck in the warmer months.  He seemed very content with that for about fifteen years.

The last few years his health was deteriorating, and he spent more and more time at home alone, unfortunately, but it was where he was comfortable.  He had many friends, but his ability to participate in sports or other activities was gone, so he didn’t get out much.

He was preceded in death by his mother and father, his brother Erik, all his aunts and uncles and many cousins.

Memorials are preferred to First Lutheran Church or the Athletic Departments at either UND or Bismarck High School.