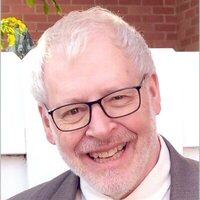 He was born in Rolla, North Dakota, on January 17, 1953, to Glen and Vivian (Hofstad) Abrahamson.

Keith graduated from Dunseith High School, the Turtle Mountain School of Paramedical Technique, and Minot State University. He also received training in nuclear medicine and ultrasound. Most of his career, he was an ultrasound technologist with ARDMS certifications in OB/GYN, Abdomen, and Adult Echocardiography.

Keith was a long-time member of AIUM (American Institute of Ultrasound in Medicine), SDMS (Society of Diagnostic Medical Sonography), and the Elks.

He married Valerie Nordstrom in 1977 and they had two children: Angela and Adam.

Keith was a tinkerer and loved gadgets. As friends and family know, if you needed a part for something, there was a good chance he’d have it amongst his collection of auction finds. If he didn’t have it, he’d come up with a duct taped version. Keith was always ready to help.

He was preceded in death by his parents; brothers, Gary Abrahamson and Larry Abrahamson; and in-laws, Ruben and Gail Nordstrom.

Cremation has taken place and there will be a memorial service at a future date.

In lieu of flowers, the family prefers memorials be directed to CHI Health at Home Hospice.