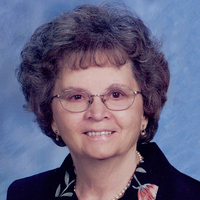 Elaine was born on July 18, 1928 at the hospital in Bottineau, North Dakota, to Theodore and Myrtle (Joern) Miller—the second of seven children. She was raised on farms near Deep and Russell, in Bottineau County, and attended school at Deep and then Russell, graduating high school there.

In 1947, she married Maurice Gessner of the Deep/Russell area. They would have three children. They farmed for a few years south of Russell, then lived for short periods of time in Upham and Bantry, and in 1956 moved to Minot, where Elaine would live for the rest of her life. The family lived in Eastwood Park for a few years, then moved to a new home in northwest Minot. Elaine enjoyed the camaraderie of a neighborhood homemaker’s group during these years and beyond. She was a hard worker, running the household and working at various jobs, the last at the Sweetheart Bakery stores. She and her family enjoyed the many trips to visit relatives in the area. Maurice died in 1971.

In 1973, Elaine married Alvin Fiskum, a truck driver for Sweetheart. Alvin had three sons from a previous marriage and many siblings spread around the U.S. Elaine enjoyed getting to know the Fiskum clan.

Elaine and Al retired from Sweetheart in 1985. They traveled in the western U.S. and to Alaska and Minnesota a number of times—mostly to visit family. They also traveled to craft shows in state, camped, and enjoyed fishing jaunts. There were lots of ice cream stops. Both enjoyed watching sports; Elaine particularly liked Twins baseball and following local sports teams. After 48 years of marriage to Elaine, Alvin died on July 17, 2021.

Elaine loved hearing about the affairs of her extended family. She was interested in the lives of the medical and other people who helped her. With her excellent memory she was a fount of family history. She was “Cookie Grandma” and a prolific baker of angel food cakes. “Love you” was how she said goodbye.

Elaine was a life-time member of Missouri Synod Lutheran churches. She was a member of St. Mark’s Lutheran Church in Minot since 1960.

Elaine’s family wishes to thank the staff at Edgewood, where she had lived since 2016, for their compassionate care and the staff of the Trinity eyecare clinic and the Div. of Vocational Rehabilitation (ND Human Service Dept.), who helped Elaine cope with her impaired vision.