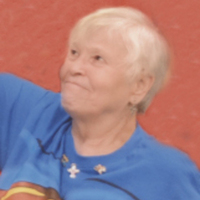 Marilyn was born April 12, 1942, the daughter of Arthur and Gladys (Fugleston) Gehring at Spokane, WA.  She was raised and educated first in Fargo, ND and her later years at Minot where she graduated from Minot High.

On August 22, 1981, Marilyn was united in marriage to Milo H. Logelin. They made their home in Minot and raised four children. Marilyn worked as a bartender at the Torch Light in Minot for many years.

Marilyn’s hobbies throughout the years included animals, cats, dogs, and a parakeet. Going to the casino, attending the North Dakota State Fair activities, gardening and spending time with her family, friends, and grandchildren at the local parks in Minot.

Milo preceded her in death on April 17, 2022, in Minot. Marilyn will be laid to rest with Milo at Rosehill Memorial Park in Minot.