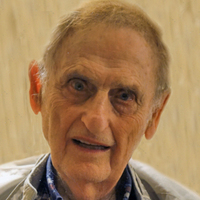 To view a livestream of the service access:  www.mtmsales.net/thomas

Leonard Morris Lund was born on October 17, 1923 on a farm in Elverum Township of Pierce County southeast of Rugby, ND to Anton and Julia (Evenson) Lund.  He grew up on the family farm and attended school in Silva, graduating from Silva High School in 1941.  He continued his education at Jamestown College for two years prior to serving in the U.S. Army Air Corps from 1943 – 1946.  His most noteworthy duty was writing for the 15th Air Force newspaper “Stars and Stripes” in their Rome office.  Following his honorable discharge, he returned to Jamestown College and graduated with a degree in social science and a minor in chemistry.  Following graduation, he was employed by the Minot Daily News for a short time before continuing his education at Columbia University in New York city where he received his master’s degree in Journalism.  Then, he returned to North Dakota and was employed by the Grand Forks Herald where a highlight was writing a front page article on the discovery of oil in western North Dakota.  He moved to Cedar Rapids, Iowa in 1951 and was employed for a short time in the public relations office of Coe College.  He returned to newspaper writing when he worked for the Devils Lake Journal from 1952 – 1958 and the Farmers Press in Minnewaukan, ND for a short time.

Leonard continued his career in newspaper writing at the Minot Daily News in 1959 where a focus of his writing was on agriculture related topics.  However, a highlight for him was an article he penned about Sondre Norheim who was famous in his ancestral home of Norway.  He retired in 1988 but continued to write on a part time basis long into his retirement.  Also, he did public relations writing for the Sertoma Club of Minot and was proud to have assisted with locating the grave of Sondre Norheim, the father of modern skiing, near Denbigh, ND.  In addition to this research, he worked for many years compiling the genealogy of the Lund and Evenson families dating back to 1370.  Most recently, he had been a resident of Edgewood Vista.

Leonard was a member of the Minot Sertoma Club, Republican Party and regularly attended church at Bethany Lutheran and Christ Lutheran Churches in Minot and was a former member of First Lutheran Church in Rugby. He was very proud of the award he received from the ND Association of Soil Conservation Service and being King (3X) of the Senior Thanksgiving Love Feast at the Minot Air Force Base.

Leonard especially enjoyed travel with highlights being trips to his grandfather’s ancestral home in Skollenborg (near Kongsberg) in Norway (2X), Hawaii (3X), Mexico (3X), Jamaica, Bahamas, Alaska, every province and territory in Canada, every state in the U.S.A. and all of the Amtrak routes in the U.S.

Leonard very much wanted to acknowledge the excellent care he had received from Rhonda and Tom Johnson and the staff of Edgewood Vista and the assistance from the Minot Commission on Aging.

Visitation: Sunday, July 31, 2022, from 12:00 p.m. until 2:00 p.m. at the Thomas Family Funeral Home, Minot.
Memorials are preferred to Salvation Army, Minot Commission On Aging or the Prairie Village Museum, Rugby.