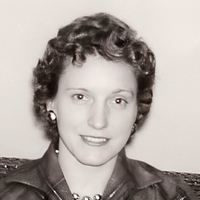 June was born to Ed & Marie Olson on June 6, 1928 on the family farm in Cass County, near Kindred, ND. At an early age June’s family moved southeast of Casselton, ND. She attended grade school in Durbin and later graduated from Casselton High School in 1946, where she was voted homecoming queen during her senior year.

June married Alan Lund in 1947. They raised three sons, Steve, Dan & Tom. The family resided in Mott, ND until 1966 when they moved to Bismarck. While in Bismarck, June went to work as a receptionist for Q&R Clinic where she developed many life-long friendships with her co-workers. She was proud of her time spent at the clinic and was always remembered for her smile and cheery disposition. After retirement, June & Al spent many winters in Arizona. Al passed away in 1997 while they were in Arizona.

In subsequent years June enjoyed visiting her four sisters, her brother, numerous nieces and nephews in the Fargo area and spending time with family and friends in Bismarck.

Dementia reared its terrible effect on June’s life in 2010 and she moved to Edgewood Vista. In 2019, June went to live at Missouri Slope Nursing Home. June’s family wishes to the express their appreciation to both facilities for the wonderful care they extended to June.

She was preceded in death by husband Al; son Dan; son-in-law, Chris; her parents; sisters, Doris, Lorraine, Gerry, Donna and her brother, Ronnie.

Masks are recommended but not required.