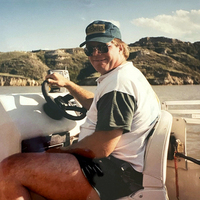 Charles Ward Hoffman Monson, Sr. quietly passed away at his home surrounded by his loving family on July 17, 2022.

Memorial services will be held at 11:00 AM, Friday, July 22 at Parkway Funeral Service, 2330 Tyler Parkway, Bismarck. The family will begin greeting guest at an hour before the service begins.

He was born January 15, 1954 in Minot to Keith Douglas and Georgia Winnifred (Hoffman) Monson.  His great-grandfather, Charles Hoffman, gave him the Arikara Indian name Ne’ Gi Tha which means commander-chief.

He spent his early years on the ranch West of New Town.  He moved to Whitefish, Montana, and Grand Coulee, Washington, as his dad worked for the Bureau of Reclamation, and then graduated in 1972 from New Town High School.

On August 17, 1973, he married Annella Bangen of New Town. They were blessed with three children: Jan, Jo Lynn, and Charlie. They raised cattle on the ranch and he worked in the oil industry until 1986 when they moved their family to Breckenridge, Minnesota, where they both attended NDSCS and graduated with degrees in Electronics Repair in 1988.  After graduation, they returned to New Town and opened an electronic and appliance repair shop- Video Detectors.

He later moved to Bismarck where he worked at Sears a short time before he opened another appliance repair shop until he retired.

Chuck loved life and spending time with his family, his many dogs, especially Shadow and Red, hunting, spending hours on Lake Sakakawea on his pontoon, and playing cards. He would even cheat whether you were watching or not. He was known for his homemade ice cream that he made for special occasions. He thoroughly enjoyed his Bismarck home, watching all the fantastic wildlife.

He will be deeply missed.