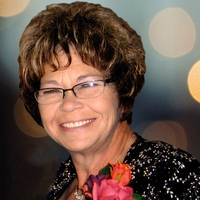 Donella Luetta “Trauger” Michelson passed away at the age of 70 on July 1st,2022.

Donella was born in Bismarck on March 2nd, 1952, the daughter of Calvin and Verna Trauger. She lived in Mandan up until 1960 when her family moved to Lake Tschida, where they ran the North Shore resort. After graduation from Elgin High School in 1970, she attended Jack’s Hairstyling School. This was the beginning of a long career doing hair and making wonderful friendships. Her career spanned working for several salons but most of those years were spent having her own shop out of her home.

Donella was known as quite a matchmaker, introducing many couples, including her brother and future sister-in-law. Soon after, she met her own match, Miles. Donella and Miles were married in 1977 and began their life together in New Leipzig. In 1979, they were blessed with the birth of their daughter Melodi. Having a daughter to dress up in frills was a dream come true. Being a mom, aunt and later a grandma came naturally to her. Donella had a deep love for many cats and dogs over the years. Her greatest joy was becoming a grandma to Kaiden. They shared a special bond with their daily trips to McDonalds for caramel frappes. She always knew how to make everyone feel special.

In addition to making an impact on her family, she also shared her passions with others. This included being president of Elgin Lioness club, Girl Scout leader, coach of the Elgin/New Leipzig drill team, and working  on the  Hillary Clinton and Barack Obama campaigns, and other democratic races.

She was preceded in death by her husband, Miles; father, Calvin; mother, Verna; and many other family, friends and fur babies.