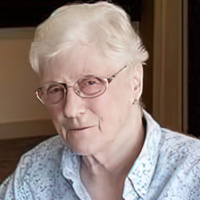 We are currently experiencing technical difficulties with our livestreaming, a recording of the service will be posted here as soon as possible.

A service livestream will be provided by Cathedral of the Holy Spirit at the following link:

On July 18, 2022, Anna (Ann) Mae (Canaan) Kormos got her wings to fly free and walk with Jesus after a brief battle with cancer. She was 89 years old.

Mass of Christian burial will be held at 10:30 AM Thursday, July 21 at Cathedral of the Holy Spirit, 508 Raymond St., Bismarck. Burial will follow at the North Dakota Veterans Cemetery.

Ann was born February 22, 1933, at Fort Sam Huston Hospital, Texas. Her parents Clarence Montgomery and Ruth Sylvia Canaan had three previous sons, Robert Charles, William Fred and Richard Kyle who preceded her in passing to eternal life. Her Father served in both WWI and WWII. After WWII, Clarence settled to raise his family of four buying a farm near Scotland, Arkansas where Ann grew up. Ann was a talented athlete, playing varsity basketball in grades 10-11. She also was voted most popular and homecoming queen.

After graduating, she decided to continue in a long line of Canaan’s who served in the military. She entered the Air Force and served in many headquarter units as an office manager. It was while serving in the Airforce in Germany she met her husband John Kormos and was honorably discharged in 1952. She gave up her own personal pursuits at this time to become the central figure in the lives of her children and husband. Her three children John (Jack) Kormos, Andrew Kormos and Michael Kormos are still living.

After John Kormos retired from the Air Force, John and Ann settled in North Dakota, as contracting job opportunities for John were there. They built a post military life, had children go to high school, built friendships, were a part of a Catholic church community, and fell in love with the land and the people of North Dakota. Ann had many beautiful years enjoying her time as a bowling team member, volunteering at the local hospital and making breakfasts and dinners for the many friends her sons brought home.

In later years, Ann welcomed to North Dakota her grandchildren. Her seven grandchildren who are left behind are John C. Kormos (son to John (Jack) Kormos), Paulina, Frank and SIlje Kormos (children to Andrew Kormos) and Lillian and Kayleigh Kormos (daughters to Michael Kormos). She would stock her cabinet full of every candy that makes a mom cringe to indulge in pure grandmother bliss with her precious grandchildren. She loved being a grandmother and every visit was a treasured part of her life.

Ann was very introspective and felt very one with the natural environment. She loved the rainstorms of North Dakota and the smell of the rain on the earth. She was an avid walker and was well known in town as the woman who walks. She also created a magical world outside her kitchen window. Every bird feeder was filled, and she knew every bird family who visited her home. Many animals and birds were very loved by Ann in her lifetime. She had a soft-spoken way to make everyone feel embraced and welcomed animals and human alike.