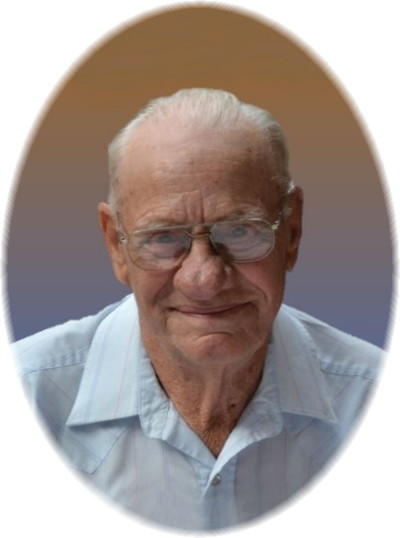 Nick Olheiser, 94, Dickinson, died surrounded by family on Thursday, July 14, 2022 at Edgewood in Mandan. Nick’s Mass of Christian Burial will be at 11 a.m., Friday, July 22, 2022 at St. Joseph’s Catholic Church, with Fr. Keith Streifel as celebrant. Interment will be at St. Pius Cemetery, Scheffield. Visitation will be on Thursday from 4 p.m. to 6 p.m. at Ladbury Funeral Service, Dickinson with a rosary and vigil at 6 p.m. with Deacon Ross Reiter presiding.

Nick Olheiser was born on January 5, 1928 in Scheffield, North Dakota, the son of Joseph and Eugenia Olheiser. He was raised and educated at St. Pius. Nick married Cecilia Greff of Mott on October 14, 1952. They made their home on the Olheiser farm north of Scheffield.

While farming, he and Cecilia raised eight children. For many years he was part of the choir at St. Pius Catholic Church in Scheffield until the parish closed. Nick was also a member of the St. Pius Verein. The Verein supported St. Pius in many ways. Nick was an active member of the Verein throughout his life and spent countless hours working to support the parish, the school and the cemetery in Scheffield. Nick was also a member of St. Anthony Club, and served on the board of numerous cooperatives and community organizations. He was very active in the community and church, volunteering for many years at the House of Mana, Meals on Wheels, Germans From Russia Historical Society, and the Dickinson Museum Center to name a few.

For many years Nick and Cecilia travelled in their motor home to visit family and friends in Oregon, Minnesota, Missouri, Texas, Montana, South Dakota, Oklahoma, and many points in between. During his travels he would take pictures of churches and catch up with his growing family. In 1995 Nick and Cecilia moved to Dickinson.

Nick was interested in many things, but documenting history was among the things he loved most. He wrote meticulous historic records of the Olheiser family, the farm, the Scheffield community and of those who lived there.  He had an astounding memory for names, dates and events.

Another one of Nick’s passions was inventing and crafting useful tools for use around the farm and house. Nick had a gift of being able to make something out of nothing. After moving to Dickinson, he focused those skills on building miniature replicas of churches and homes. He could be found tinkering in his woodshop or workshop, welding, hammering, sawing, grinding, gluing and nailing. He loved to refurbish old pieces of farm machinery, fix old bicycles and wagons, and create yard art for Cecilia’s vegetable and flower gardens.

Nick was a kind and generous man, always had a smile on his face, gave the best hugs, had a great sense of humor and an infectious laugh. He gave freely his time and talents, lending a hand whenever and wherever he was needed. Above all, he loved spending time with Cecilia, his children, many grandchildren, great-grandchildren, friends and neighbors.

He was preceded in death by his wife of 66 years Cecilia, his parents, Joseph and Eugenia (Selinger) Olheiser; Brothers John Olheiser, Michael Olheiser, and Leo Olheiser; and sisters Agnes Job, Tillie Messer, and Rose Reicks.