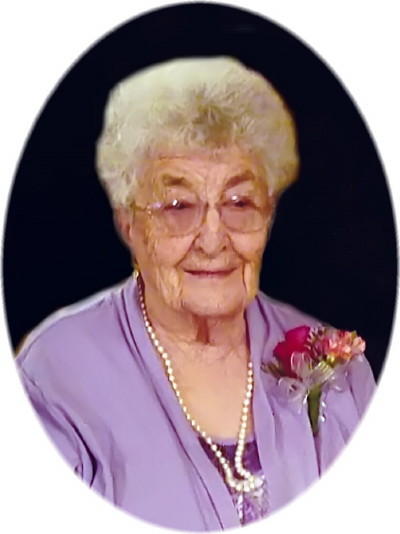 Sarah Emmil, 91, Belfield, died Sunday, July 3, 2022 at St. Benedict’s Health Center, Dickinson. Sarah’s Mass of Christian Burial will be at 10 a.m., Friday, July 15, 2022 at St. Bernard’s Catholic Church, Belfield, with Fr. Shane Campbell as the celebrant. Interment will follow at St. Bernard’s Cemetery. Visitation will be on Thursday, July 14, 2022 from 4 p.m. to 7 p.m., at Ladbury Funeral Service, Dickinson, and will continue one hour prior to the Mass on Friday at the church. There will be a rosary & vigil at 7 p.m., Thursday, July 14, 2022 at Ladbury Funeral Service, Dickinson.

Sarah Herauf was born September 28, 1930 in Dickinson, the daughter of John and Mary (Miller) Herauf. At the age of 12 her parents were killed in a car accident, Sarah was raised by family and was educated in Dickinson.

Sarah was united in marriage to Herbert Emmil on May 16, 1949 at St. Joseph’s Catholic Church, Dickinson. They farmed near Schefield until 1954 when the family moved to the Herauf family farm 11 miles south of Belfield. They retired from farming in 2003, but remained on the farm until July 14, 2018 when they made the move to Edgewood Hawks Point in Dickinson. The past few years she has made her home at St. Benedict’s Health Center.