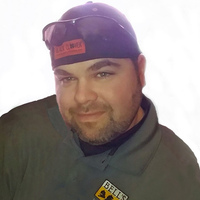 Jason Getzlaff, 40, Minot, passed away on Saturday, July 9, 2022, surrounded by his family following an unexpected illness.

Jason was born August 5, 1981, in Minot, ND to Perry and Sandy (Carlson) Getzlaff. He was educated in Minot, graduating from Minot High School, Class of 2000.

Jason worked in various departments at Miracle Mart until landing a job at Nash Finch as an order selector.

Jason was united in marriage to Theresa Speten on September 1, 2007 at Bread of Life Lutheran Church in Minot. They lived in Minot until moving to Bismarck in 2012, when Jason took a job in sales at McQuade Distributing.

They returned to Minot in late 2016 and Jason started his position in sales at Magic City Beverage in January of 2017. He valued the customers, clients and staff he was privileged to work alongside during his tenure.

Jason enjoyed bowling, golfing, fishing and camping with family and friends. He was quick witted, smart, friendly, hardworking and loved to joke around. He could talk to anyone about anything and had a good relationship with everyone he met. He was a caring and loving husband, brother and son. He was adored by all his nieces and nephews. He will be missed deeply by everyone blessed to share in his life.