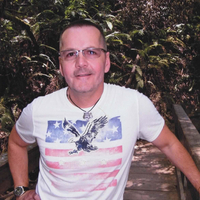 Storyteller, mentor, teacher, champion of children, warrior for the marginalized… and “badass” pirate.

Services will be held from 9 to 11a.m., Friday, July 8 at Parkway Funeral Service, 2330 Tyler Parkway, Bismarck.

As a little boy, he lived in various places throughout rural North Dakota, traveling with his family as they followed Joe’s work as an engineer, developing I-94. Eventually, the family settled in Bismarck. Here, Rocky and his three younger brothers would add a youthful, albeit mischievous, energy to the community.

Anxious for new stories and independence, Rocky “graduated early” and started his own adventure of working and travelling. He became a “jack-of-all-trades,” working with a moving company, as a diver for a construction company, hotel management, and even as a personal trainer. During his quest for a true career, Rocky met and married Tracy Pierce. Soon after, Rocky returned to school. He completed his GED and discovered a passion for teaching.

In 1997, Rocky was joined in his adventure by his son, Ben-Luke. Together, these two embarked on different, but still story-worthy, experiences. From getting attacked by a cactus while hiking in Medora, to sharing a weekly pizza (with extra onions-of course) and root beer at A&B, Rocky was devoted to his son and his family.

It was during his time as a teacher at Myhre Elementary School that he met Jeanne. They initially bonded over their love of working with children. As they began working closely together, Rocky tried to warn Jeanne that he was “the king of smart alecks.” He knew they were destined to be a team when she simply replied, “Well then, meet the queen.” This complementary pair teamed-up for life and wed on June 6th, 2008. They settled their newly blended family of three boys in Bismarck on Apache Street.

Rocky always had an “open-door-to-all, no judgements” approach to his relationships with kids. The close rapport and trust he built with his students is a reflection of his good soul and willingness to help everyone he could. After many years as an elementary school teacher, Rocky identified that there were limits in his ability to aid students if the problems stretched beyond the classroom.  He became a mentor at Youth Works so he could work one-on-one with children that came from disadvantaged backgrounds. Working his way up to program coordinator, his dedication reached many lives and helped children get through their most vulnerable times. Rocky was truly one of the best allies you could have in your corner.

Rocky enjoyed the outdoors and could often be found either in the woods or on the water. He always kept physically active, from body building during his younger years to completing sprint triathlons after the age of 50.  As adults, he and his brothers have banded back together for more adventures. A favorite example of their silly antics is when they converted a pontoon into a pirate ship and sailed down the Missouri River together.

When there was a need for an English Language Learners (ELL) teacher for children of refugees and other non-English speaking families, Rocky stepped up to the role and returned to the Bismarck Public Schools system. He continued to foster the same legacy of inclusion and acceptance with his ELL students that he has with all his past classes. He will be greatly missed by students, family, and friends.

Rocky was preceded in death by his mother, Carol; and his sister Lydia.