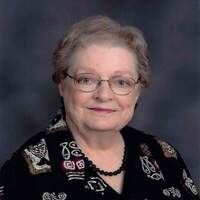 Willa Jean Carlson, 88, Bismarck, left her earthly home at Edgewood and entered into her heavenly home on July 4, 2022. Funeral services will be held 12:30 p.m. Monday, July 11 at Parkway Funeral Service, 2330 Tyler Pkwy, Bismarck. A service livestream will be available on the funeral home’s website.

Visitation will be held from 5 to 6 p.m. Sunday at Eastgate Funeral Service, 2302 E Divide Ave., Bismarck. A time of remembrance and prayer will be held at 6 p.m.

Interment will be with her beloved husband, Clint, at the North Dakota Veterans Cemetery, Mandan.

Willa Jean Schonberger was born on December 19, 1933, in Fargo to Charles and Marie (Groth) Schonberger.  She was their fourth child and only girl.  After three boys she was a welcome addition to the family, and maybe just a little spoiled by her parents as well as those big brothers.

She grew up on the family farm at Wheatland, ND, and attended Gill township country school through the eighth grade.  She then attended and graduated from Oak Grove Seminary, in Fargo, in 1951.  She loved her time at Oak Grove and was very active in school activities such as chorus and cheer leading.  It was while she was attending Interstate Business College in Fargo that she met her future husband, Clint – a handsome young man from Edgeley, ND, who was working in Fargo.

Willa and Clint were married on March 26, 1953, in Embden, ND.  Clint’s work moved the new family often in the early years of their marriage.  They lived in Fargo, Grand Forks, Tioga, Williston and Minot before they made their final move to Bismarck in 1968.  Willa moved to the Edgewood Vista in 2018 and was very content at her home there.

Willa was a stay-at-home mother while raising their three children. After they were grown, she became involved with the Republican Party in Bismarck.  She was a District 47 Chairwoman, and president of the Bismarck Republican Women.  She enjoyed attending many of the functions and conventions locally and nationally.  She was a secretary in the office of Governor Allen Olson during the 1980’s.  She also worked part-time for the North Dakota Petroleum Council for a few years.

Willa made friends easily and kept them for life as evidenced by her social groups of Birthday Club, Last Friday Lunch Bunch, and her card club.  In her later years she had a great group of women friends from Mandan that met often to laugh, chat, and talk about their wonderful grandchildren. She was a member of Good Shepherd Lutheran Church.   Her hobbies were reading, rubber stamping, and playing cards.  She was happiest when spending time with her family.

Clint and Willa were blessed with three children that all survive her:  Vicki (Rick) Slavik, Robert (Tammy) and David (Jerri), all of Bismarck; grandchildren, Sarah (Dan) Owens, Grand Forks, Allison Slavik (Payton Berger), Fargo, Hannah (Alayna) Carlson, Jackson Carlson, and Baylee Carlson, all of Bismarck.  She was blessed to have twin great-granddaughters, Victoria and Elizabeth Owens.  She is also survived by one sister-in-law, Barbara Schonberger, Westminster, CO, as well as many nieces and nephews.  She is survived by two very special friends of over 50 years, Dorothy Litchfield and Jeanie Kraft.

She was preceded in death by her husband Clint in 1997; her parents; brothers, LeRoy, Harold, and Robert; and special sister-in-law, Edna Schonberger.

In lieu of flowers, please consider giving a memorial to Oak Grove Lutheran School at 124 N Terrace, Fargo, ND  58102, class of 1951.  This scholarship fund is used for students in need.  Donations may also be made to Central Dakota Humane Society.

The family would like to extend a special thank you to the staff of Edgewood Vista for the wonderful care they gave to their mother.  She loved them, and it was obvious that they loved her.