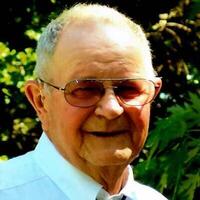 Clifford Gene Rime was born April 18, 1936, in Garrison, ND to Manuel and Agnes (Iverson) Rime.  He lived his entire life on the farm.  He graduated from Garrison High School in 1954.  On October 21, 1958, he married Vanona Mahoney of Ryder, ND.  They made their home on the farm west of Garrison and raised their children.  Clifford enlisted in the Army National Guard and was called to    active duty in 1961.

Although farming was Clifford’s entire life, he had many hobbies through the years.  From raising chinchillas for the pelts and rabbits for meat, to raising cattle, pigs, and chickens.  He was also a very talented, artistic man.  He made jewelry, belt buckles, clocks, lamps and tables with agate rocks.  He was most well known however for his woodworking.  He loved to whittle, carve, and scroll saw, but he also did big projects such as a roll top desk and 5 grandfather clocks, one for Vanona and each of their kids.  Clifford also did a lot of wood turning, making thousands of wooden tops to give to kids at the Dickens Village Festival in Garrison. In his later years he put hundreds of puzzles together.

He was preceded in death by his parents, Manuel and Agnes, grandson, Joshua Rime (son of Darren), and in-laws, Bernard & Lila Mahoney (Norman Buchholz) as well as many aunts, uncles, cousins, and brothers and sisters-in-law.

To view a livestream of the service go to www.facebook.com/garrisonthompsonfh/