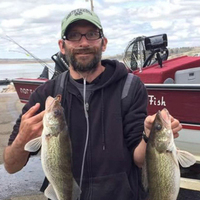 Chad was born on December 19, 1976, in Bismarck, the son of Nancy Whitlock and Jeff Mayers. Chad played hockey in his youth for nine years.  He was an impressive hockey player and once broke a record when he scored 3 goals in 28 seconds, also known as a hat trick.  He graduated from Bismarck High School in 1995.  He later received his plumbing certificate from the North Dakota State College of Science and began working as an apprentice plumber for Anderson Plumbing in Bismarck. In 2001, Chad moved to Arizona and worked for Rigg’s plumbing company where he became a journeyman.

Chad was blessed with four daughters, Kimberlee, Hannah, Hailey, and Marley all who meant the world to him.  When they were very young, he was fortunate to have the opportunity to be a stay-at-home dad, something he embraced wholeheartedly.  He spent countless hours doing art projects, reading books, rollerblading, going to the park, and taking them fishing and other excursions.

Chad suffered a major setback when he contracted the H1N1 virus compounded with necrotizing pneumonia, ultimately losing his entire left lung and the removal of all of his left ribs which left him disabled.  After disabled, he enjoyed less strenuous work and in the late summer and fall you could often find him at a Farmer’s Market selling corn and other produce.  While working with a local farmer transporting produce, he suffered another setback when he was in a truck accident resulting in his spinal cord being severed from his pelvis.  During his life he battled addiction, a disease he was challenged with daily.  So often true for this disease, sometimes he won the battle and sometimes he did not.  He went back to school and earned an associate degree in drug and alcohol addiction counseling although he never had the opportunity to use his degree professionally.

Chad appreciated the small intangible things in life over material things.  He always had a smile on his face and saw the beauty in life around him.  He tried his best to live each day to the fullest; he never knew if it would be the last.  Chad loved music, especially rock and roll.  Chad closely followed hockey and football.  His favorites were the Minnesota Wild hockey team and the Minnesota Vikings football team.  One of his favorite summer pastimes was spending time on the Missouri River fishing from his boat with family, friends, and his service dog, Millie.  Millie was his faithful companion in everything Chad did and everywhere he went.  Millie will miss Chad deeply but will continue to be loved in her new home with Chad’s daughters, Hannah, and Hailey.

Chad had a huge heart and loved freely. Recently Chad had been enjoying important milestones with his daughters.  He loved his daughters so much and loved to see them smile.  His oldest daughter, Kimberlee gave him the precious gift of a grandson and the prestigious title of Grandpa.  Chad’s immediate and extended family brought so much joy to his life.

God’s grace blessed us with his presence and God decided it was time to take him home. Words cannot express how much he will be missed, but all of us who love him know God’s Kingdom and Eternity is where we will see him again. Until then, we love and miss you, Chad! We love you, Chad: Dad, Grandpa, Son, Brother, Nephew, Uncle, and Friend.

He was preceded in death by his father, Jeff Mayers; grandparents, Evonne and Richard Chouklaus and Daryl and Orvetta Mayers; and uncles, Steve and David Choukalos.