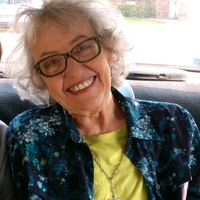 Lorene “Loree” Lucas, 79, formerly of Vallejo, Calif., died June 28, 2022, in Mandan, following a long battle with cancer. A memorial service will be held 3 p.m. Friday, July 1 at Parkway Funeral Service, 2330 Tyler Pkwy, Bismarck. A service livestream will be available on the funeral home’s website, listed below.

Loree and her twin, Lois, were born in Seattle, Washington, on May 19, 1943, to Carl Martin and Lora Lois (Miller) Siegfried. She graduated from Center High School in 1961 and worked in Riverdale for the Corps of Engineers for two years. She then moved to Fort Yates and was the secretary at Standing Rock High School for a year before moving to California to work as a secretary for the chaplain and also for the welding engineers on Mare Island Naval Base.

On April 30, 1966, Loree married Nick E. Lucas in Reno, Nevada. When her son Nick was born in 1970, she stepped away from the work force to be a stay-at-home mom but continued to do volunteer work for her church. She also sold Avon for many years.

Loree and her family moved to Subic Bay in the Philippines in 1982 when Nick, Sr. was offered a special project, and the family lived there for two years. While at Subic Bay, Loree began working for the Naval Investigative Service, a position she held when the family returned to the U.S. in 1984 until Mare Island was officially closed in 1996. During her time at Mare Island, Loree received the prestigious award of Support Person of the Year for the entire Northwest Region. She was the first person from the NIS from Mare Island to ever receive this award.

After the closure of Mare Island, Loree worked for the Vallejo School District for 13 years, retiring in 2010. Several years after retirement from the school district, Loree moved to Bangkok, Thailand, to live with her son and family for three years. In 2019, she returned to the U.S., moving back to her home state of North Dakota, living in Mandan with nieces, Karen, Kimberly, and Derryn Siegfried. She went back to Bangkok for a visit in early 2022 and returned to Mandan shortly before her death.

Loree was preceded in death by her husband, Nick; her parents; sisters, Lois Pleets and Lynda Iron Eyes; nephew, Darin Siegfried; and her step-daughter, Karen Lucas.

Memorials and expressions of sympathy may be sent to Parkway Funeral Service, 2330 Tyler Pkwy, Bismarck, ND 58503, and will be given to the family.