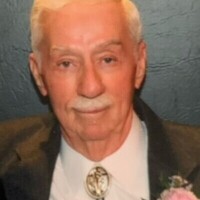 Services will be held 11 a.m. Saturday, July 2, at Zion Lutheran Church, 413 East Ave D, with Rev. Thomas R. Marcis, Jr., officiating. Visitation will be held one hour prior to the service.

Burial will be held at Fairview Cemetery.

A short chronicle of his life, written by Fred E. Baker Jr.

Born February 5, 1941, in Carrington, ND and was raised in McHenry, ND. I was the oldest of six children born to Fred and Norma (Fadness) Baker.

As a youngster, I was always ambitious, playing sports in town and spending as much time as I could on my uncle & aunt’s farm, Ralph and Ann Harding, 6 miles north of McHenry.

In the summer of 1952, I started working full time during the summer on the farm, mowing and raking hay and cultivating corn with a team of horses. In the fall at harvest, we shocked grain and hauled bundles to the threshing machine. I spent the next four summers working on the farm.

My parents moved to Coleharbor, ND in 1955 as my dad got work in the building of the Garrison Dam.

I started my first year in the construction industry in the spring of 1956 working for Bober Construction of Minot, ND, picking rock as part of building Highway# 8 north of New Town, ND. After a month, I was asked to drive a semi-gravel truck for the remainder of the work season.

In the spring of 1957, I went to work for Leman Stewart Construction Company in Plaza, ND, operating dozer and scraper for the next three work seasons.

I graduated from high school in 1959 and married my high school sweetheart in the fall of that same year. We continued living in Coleharbor, and in spring of 1960, I went to work for Haggart Construction Company in Bismarck, ND, operating cat, scraper, dozer and motor grader for the next three years.

In 1963, I went to work for Northern Improvement Company, operating finish motor grader in their earth moving division for two work seasons.

Then in 1965, I moved my family to Underwood, ND and went to work for S & W Excavation, operating motor grader and dragline and crane for two years.

In 1967, I went to work for William Clairmont Inc of Bismarck, ND, operating finish blade and dragline. In 1970, we got the first contract on the McClusky Canal Project. I operated the first large dragline for

the company for the first season. The next year, I was put on the ground and made Production Foreman over the draglines and dozers.

In 1974, I was made General Superintendent and started supervising different projects for the company throughout a five-state area in the upper Midwest. We moved our family from Underwood to Bismarck in 1974 so I could help manage the winter overhaul of the equipment at the company shop. This cycle continued until the fall of 1982, when the company shut down and sold out.

In the spring of 1983, I went to work for Henry J Kainger Company in Beulah, ND, working as the earthwork foreman in the first-year construction of the coal gasification plant.

In spring of 1984, I went to work for Bechtold Excavating of Minot, ND and, for the next four years, supervised highway construction jobs, flood control and canal projects. Then the owner retired and sold out in the fall of 1987.

In early 1988, we sold our house in Bismarck and moved to Brownwood, TX, as I went to work for Brown & Root Inc, a subsidiary of Haliburton Company out of Houston, TX, as Assistant Project Manager. They had a contract to build a dam on the Colorado River, at Stacey, TX. My position as Assistant Project Manager was in charge of all earth moving, drill and shoot and rock excavation. Also, I handled the shop and mechanics.

In 1991, I was assigned a project in Jamestown, CA, as Project Manager to move a crew and machinery to an open pit gold mine owned and operated by Sonora Gold Inc. Our contract was to haul shot material, as they were behind in their production.

The next assigned project was in Bartow, FL, where we had a contract with Florida Power Company to prepare a site to build an electrical power plant. Work included de-watering, building cooling ponds and the site for the plant. This project finished in 1996.

We were moved to Fort Worth, TX upon completion of this project and I worked in one of our offices for the better part of 1997. Then I was assigned management of three interstate and highway projects in southern North Carolina. We set up our field office in Hamlet, NC.

In November 2000, after completion of these projects, I decided it was time to retire and move back to North Dakota and watch our grandkids grow up.

I enjoyed as hobbies working in the yard, doing projects in the garage, playing golf, listening to country music, and spending time with family.

I was preceded in death by my father and mother, Fred Baker Sr. and Norma; and sister-in-law, Kristy Baker.