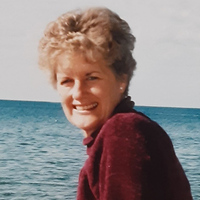 Judith “Judy” Louise Campbell, née Fries, passed on June 19th, 2022. The daughter of Rudolph and Dorothy Freis, Judy was born in Scranton Township, Hamburg, New York, on February 23rd, 1939.  Judy enjoyed art and choir and became a member of the synchronized swim team in high school. Judy fell in love with a handsome soldier and soon after married Patrick W. Campbell of Mt. Morris, Michigan on November 2, 1957.  She was a dedicated wife to Patrick, and until his passing the two were nearly inseparable and obviously in love. Together they set an example of the blessings that come from hard work, a tidy home, and strong family bonds.

Among the many of their children’s fondest memories include joining in as Dad & Mom would sing together in the car on weekend drives; romantic songs like “The Swanee River” or silly songs like “Witch Doctor” or “Stodala Pumpa.” Another includes hearing their mom sing.  Judy was often requested to perform for church and family-related events. She could mesmerize the congregation with her lovely voice, and guiding eyes.  Her most notable song was “I’ll Rise Again,” which she performed on Easter Sundays at the Assembly of God Church in Harrison, Michigan.

Judy was also a devoted homemaker, and together she and Patrick modeled traditional American values to their children. In the evenings, Patrick would drive 75 miles home from overtime at the iron plant, Judy would always have a delicious dinner ready, and the two would lead their children in prayer before bed. On summer days, Judy would take the kids for walks and stop by her mother-in-law’s country convenience store, where the kids were treated to a Bit O’ Honey and an ice-cold Mountain Dew. Sunday afternoons in the summer were a special delight when Judy would invite families from church to come and swim in the family pool.

Judy was a confident woman, faithful to God, and full of the wisdom of a loving mother. Her children could always count on her for encouragement, and when they needed guidance, all they needed to do was look for her sternly raised eyebrow to show them the way.

After Patrick’s passing on October 13, 2013, Judy took ill and never fully recovered. Her daughter and son-in-law, Bethany and Brian Goethe of Coleman, Wisconsin, provided her care until her son Paul Campbell of Williston, North Dakota, took over her care in 2015. Despite her ill health, Judy retained her cheerful demeanor until her passing. She was preceded in death by her parents, her husband Patrick, and her older brother Gary Freis. Judy is survived by her sister, Deborah (Charles) Ackerman; her 5 children, Deborah Jean Cotton, Patrick James (Kim) Campbell, Bethany Lynn (Brian) Goethe, David Jeffrey (Devon) Campbell, and Paul Wilford Campbell; and her many grandchildren.

Judy will be remembered and dearly missed by all those who loved her.

No local services are planned at this time.