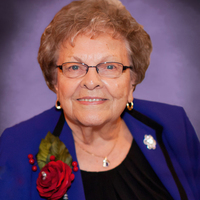 Irene was born to Edward and Elizabeth (Lennick) Krein on the family farm 20 miles north of Hebron on July 21, 1933. She graduated from Golden Valley High School in 1951. After high school, Irene was a teacher at Mercer County Farm School for one year. She then worked as a file clerk at Cloverdale Foods in Mandan until she married Albert Roemmich on August 2, 1953. They settled on a farm northwest of New Salem where they built their lives and family on love, hard work, and in the faith of Jesus. Born to this union were two sons, Rick and Randy.

Irene spent her married life as a wife, homemaker, and farm wife, being able to operate any piece of equipment used in farming. No one ever went away hungry from her house. If you were lucky, you were there when she made her fleischkuekle and kuchen. We always looked forward to her pecan pie and rosettes at Christmas. After Albert’s death in 1990, Irene moved to Bismarck where she was very involved in her church, Evangel, volunteering most Sunday mornings as a greeter and being involved in the Prime Timers, a senior adult group. She also volunteered at MedCenter One, worked for the State Tax Department during tax season, and worked as a receptionist at her niece’s hair salon. In 2016, Irene moved to Marian Manor in Glen Ullin where she resided until her death. We want to thank all of her caregivers at Marian Manor for the excellent care she received during her years there. Irene’s greatest joys in life were her grandchildren.

In lieu of flowers, memorials may be given to the local Alzheimer’s Association or charity of choice.