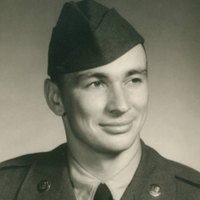 Mass of Christian Burial will be 10:00 am, on Thursday, June 16, 2022, at Ascension Catholic Church, 1825 S. Third St., Bismarck with visitation there on Wednesday, starting at 6:00 pm with a Vigil/Prayer Service starting at 7:00 pm. For those not able to attend, the service will be live streamed on the funeral home website found below.

Andrew Feist was born on January 21, 1934, the son of Anton and Theresa Feist in Strasburg, ND. He grew up on a farm two miles South of Hague, where he attended a country farm school through 8th grade before attending Hague High School, Assumption Abbey High School and then back to Hague, graduating in 1951.  Upon graduation, Andy attended Minot State Teachers college, where he received his teaching certificate.  On September 20, 1953, he married Johanna (Shindy) Eszlinger.

In October of 1953, he was drafted into the United States Army. He spent 20 years serving his country and it took him all over the world, including California, Germany, Kentucky, South Vietnam, Virginia, Washington, Alaska and many more places.  He was stationed all over the world, and Johanna followed along.  Their family grew along the way, adding six children, Keith, Bruce, Kathy, Brian, Kelly, and David. In October of 1973, Andy retired from the United States Army and was honorably discharged.

The family moved to Bismarck in 1976 and he attended Bismarck State Junior College, earning a degree in Business Management.  In 1976, he started Feist TV and Electronics at Northbrook Shopping Mall, which later moved to Main Street in Bismarck. He sold the store to his technicians and in Andy’s words “I retired to play on my computer and watch the Timber Wolves lose basketball games. I went to daily and Sunday Mass at Ascension to try and meet Jesus in a friendly, loving way and to be with him in the next.”

He was preceded in death by his parents, Anton, and Theresa; sister, Alvina (August) Traxinger; son, Bruce Feist, and grandson, Andy Feist.