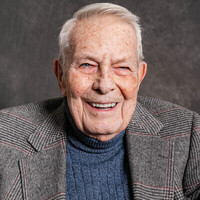 Ralph William Ehlers was born on August 29, 1929 in Lake City, MN to John and Meta (Willers) Ehlers.  He was raised and educated there and graduated from Lincoln High School in 1947.  He continued his education at the North Dakota State School of Science in Wahpeton where he received specialized training and certification in the electrical trades.  As a young adult he was employed by Northern States Power Company (NSP) in Fargo prior to enlisting in the United States Navy on November 16, 1950.  He was initially stationed at Norfolk, VA and attended aviation electronics school in Tennessee.

Ralph married Betty Loomis on June 10, 1951 in Fargo. They made their home in Jacksonville FL where Ralph was then stationed with the Navy.  He received his honorable discharge on September 15, 1954 and they returned to the Fargo-Moorhead area where he continued his employment with NSP.  The family moved to Minot in 1963 when he was transferred by the company, and he retired from NSP in 1988.  Betty died on January 24, 2012 just a few months following their 60th wedding anniversary. His daughter Deanna Kaylor died on March 30, 2022.  Most recently Ralph had been residing at Trinity Homes in Minot.

Over the years in Minot, Ralph was very active in the Minot and Minot AFB communities. He was a longtime member of Christ Lutheran Church, the Air Force Association, Chamber of Commerce, Village Family Services, Norsk Hostfest, Lions Club, American Legion, Elks Lodge, Eagles Aerie and Red Cross, most often in leadership roles. Ralph received many awards and accolades from the organizations for which he volunteered his time. Ralph especially enjoyed hunting, fishing, golfing, and joining his morning coffee group daily, as well.

Ralph was preceded in death by his parents; Betty, his loving wife of 60 years; Deanna, his beloved daughter; and his brother Morris Ehlers of Lake City MN.

Celebration of the Life of Ralph Ehlers: Wednesday, June 15, 2022 at 10:00 a.m. in Christ Lutheran Church – Minot. To view and livestream of the service access https://vimeo.com/719169686
Interment will be in the North Dakota Veterans Cemetery – rural Mandan.
Visitation: Tuesday, June 14, 2022 from 3:00 p.m. to 5:00 p.m. in Thomas Family Funeral Home – Minot.
Memorials are preferred to Christ Lutheran Church – Minot or Village Family Services Foundation.