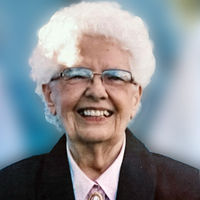 A livestream of the service may be accessed by using https://www.mtmsales.net/thomas

Charlotte Louise Brostrom was born on September 29, 1926, in Noonan, ND to Oscar and Alma (Larson) Brostrom.  She was reared in Minot and graduated from Minot High School in 1944.

Charlotte was united in marriage to John Sherman Inches of Ryder, ND on May 30, 1948, at Church of God, Minot. They made their home in Minot and were blessed with three sons. John died at age 30 on April 2, 1958.

Charlotte was employed in the accounting industry as a secretary and receptionist for the Janz and Iverson Accounting Firm. She followed Iver Iverson when he established his own practice. She was responsible for typing the Minot city audit and other reports for many years in her own home while she continued as mother and homemaker. When all the sons were in school, she went to work at Weber Spaulding Company in the Midwest Federal building. She retired in June of 1982 to remarry.

Charlotte married Reverend Wallace C. Rampy on July 3, 1982. Wallace was a pastor in the Church of God with pastorates in Moose Jaw, Sask. Canada, Grand Forks, ND and Longview, WA.  They returned to Minot in the early 1990’s to be near family due to her husband’s health and battle with Parkinson’s Disease. Reverend Rampy died on September 2, 2010.

Charlotte was a longtime member of West Minot Church of God, attending since age five. She enjoyed cooking, cleaning, and spending time with family and friends. She and Wally were great game players. You could always play a game of Chicken foot, Uno, Dominos or Scrabble when you were visiting. In her later years she always had a puzzle set up in front of the fireplace with the Gaither’s singing in the Background.

Celebration of Charlotte Rampy’s Life in Christ: Tuesday, June 28, 2022, at 11:00 a.m. at West Minot Church of God.  A livestream of the service may be accessed by using https://www.mtmsales.net/thomas
Interment: Rosehill Memorial Park, Minot.
Visitation: Monday from 3:00 p.m. to 5:00 p.m. in Thomas Family Funeral Home – Minot.
Memorials are preferred to Dakota Hope Clinic, Lighthouse Church Mission Board and Adult and Teen Challenge – Mandan.