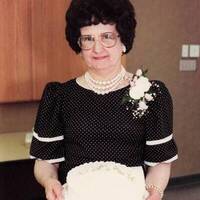 Funeral services will be held 2 p.m. Saturday, June 11 at Eastgate Funeral Service, 2302 E Divide Ave., Bismarck. Visitation will be held one hour prior to the service.

Burial will be at Sunset Memorial Gardens, Bismarck.

Hilda Halter was born February 24, 1926, south of Dodge, to Matt and Frieda (Sprecher) Halter. After her father’s death the family moved to Dodge. She married Ted Mittelstedt on November 6, 1940, in Dodge. Ted and Hilda had one child, Bob, who was born in 1941. They continued making their home in Dodge until Ted’s passing on April 3, 1971. Hilda moved to Bismarck and began working for St. Alexius Medical Center for 17 years before retiring in 1988.

She met a special friend, John, and they enjoyed going out for lunch and on weekends you could find them dancing. She enjoyed good times with her nephews and nieces joining them on family reunions and weddings. Family was very important to Hilda.

Hilda enjoyed flowers, especially roses. Many times, she would receive beautiful flowers from her nieces for her birthday and holidays. She was known for her good German potato salad and other German food.

She was preceded in death by her husband; son, Bob (2011); four brothers, Harry, John, Jack and Eugene, and one sister, Frieda Smith.