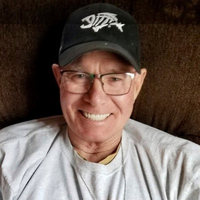 In Terry, Montana, he was born to Howard Ray Pomeroy and Fern Electa Tusler Pomeroy. Darrell graduated from Terry High School in 1973. He then went directly into the Navy, where he got to travel the world. He met his wife Margaret in 1981 in Casper, Wyoming with their first date being a fishing trip, of course. They went on to have four children Misty, Mindy, James, and Darrell Leo.

Darrell was constantly chasing the next outdoor adventure, swimming in irrigation ditches, fishing for the biggest fish, or just the limit. He hunted pheasants and deer to put food on the table and to share with his family and friends. His favorite was when his family and friends joined him in his adventures.

Darrell was always honest and continuously putting others before him. He traded walleye with potato farmers so he could dig his own potatoes, he slept in the back of the pickup to give his son the cab on fishing and hunting trips, and he taught his kids how to be incredibly hard-working adults but not to forget to enjoy life at the same time. He always put his family above everything else, with hunting, fishing, and his dogs a close second. When his kids left home, Margaret, to this day, still questions if his beloved animals came second to her.

He was always there for his kids whenever they needed him, taking out student loans in his name, helping with down payments for houses, and buying first cars even when he had nothing to give. Darrell loved his wife more than anything in the world; even on oxygen, he made her laugh while fighting for his life. They had an impressive loving 40 years together. His memory will be enormously cherished and kept alive by his wife, kids, family, and friends. His wife believes that Darrel was a once-in-a-lifetime love that can never be replaced.

Darrell got to retire at 62 years old and he enjoyed those years fishing, hunting, and spending time with his family and dogs. He was able to hunt his moose, caught the biggest northern pike of his life (28lbs, 8oz, 48.5 in long), trained extraordinary hunting dogs, helped take care of his mother-in-law, and caught hundreds of fish.

Darrell was preceded in death by his parents, Howard and Fern Pomeroy, his beloved sisters Marsha Hall and Marietta Wieseler, brother-in-law Jim Wieseler, father-in-law Leo Nolen Sr, and many dogs and friends along the way.  “FIRST, MOSTEST, BIGGEST, FISH ON”

A service will be held at a later date.