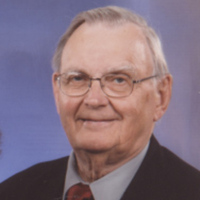 To view a delayed recording of the service, available on 6/3 access: www.mtmsales.net/thomas

Wilmer Luverne (Bill) Lind was born September 3, 1931, to Luverne and Marie (Nelson) Lind in St. James, Minnesota.  He resided there for 18 years.  He graduated from St. James High School in 1949 and shortly thereafter entered active military service with the Minnesota 49th Infantry Division.  After special training at Camp Rucker, Alabama and Fort Sill, Oklahoma for survey and fire direction center, he was sent to Korea.  He served as battalion operations sergeant for the 58th Field Artillery Battalion 3rd Infantry Division in Korea during two campaigns.  He was discharged upon returning home at Camp McCoy, Wisconsin.

He reentered the baking field he had started at the age of 15.  Most of his early career was spent in Iowa at several locations and completed training under the GI Bill.  He was a graduate of Seibel Institute of Baking Technology, Chicago, Illinois.  In 1957 he moved to Windom, Minnesota where he met his future wife, Ellen Christianson.  They were married at Maple Lake Lutheran Church, Fertile, Minnesota on June 23, 1962.  They continued to reside in Windom, Minnesota until 1965 when they moved to Minot, ND where he was a bakery manager for Red Owl Stores for 18 years.  He then was employed by Barlow’s Miracle Mart at Dakota Square as Bakery Manager until his retirement in 1996.  During this time, he was recognized as a Master Baker by The National Retail Bakers Association.  He served 50 years in the baking industry.  He was a member of Our Redeemer’s Lutheran Brethren Church and had served as Sunday school teacher, as a member of the building committee, trustee board, choir, worship band, PrimeTimers, Stephen Ministries, SheepCare Ministry, Operation Christmas Child Shoe Boxes, and after retirement was a volunteer fix it man for five years.

He enjoyed camping, vacations, hunting, and fishing with his family and friends.  In retirement he especially loved the many fishing trips with his wife Ellen.  One of his greatest joys was spending many years playing his trombone with the worship band.  He loved the time he could spend with his grandchildren.  Bill and Ellen celebrated their 50th wedding anniversary taking a tour to Israel.

Celebration of Bill Lind’s Life in Christ: 10:00 a.m. Thursday, June 2, 2022, at Our Redeemer’s Church, Minot. To view a delayed recording of the service, available on 6/3 access: www.mtmsales.net/thomas

In lieu of plants and flowers, memorials are preferred to the Our Redeemer’s Lutheran Brethren Church music department.