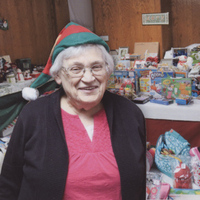 Ruth was born June 8, 1942 in New Salem, North Dakota and was the fifth child of fifteen born to Reinhold and Lena Gunsch.

She attended school in Bismarck and moved to Minot with her parents and later she moved to Washington. In 2007 Ruth moved to Velva and in 2019 she moved back to Washington due to her health.

She attended Velva United Methodist Church where she was very active in the Elf Project. Her love of children lead her to work at a daycare and later taking care of children in her home until she moved.

She is preceded in death by her parents; brothers, Harold, Eugene, Duane, Larry and Roger; sisters, Betty and Linda; grandson, Tristan Ringoen and great-grandson, Derek Brown.