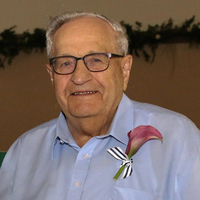 Herbert Preszler, 91, Bismarck, formerly of Braddock, ND was welcomed into the loving arms of his Lord and Savior on Thursday, May 19, 2022.

A funeral service will be held on Friday, May 27 at 11:00 AM at McCabe United Methodist Church, 1030 N 6th St., Bismarck with visitation one hour prior to the service. Visitation will also be held from 6:00 PM to 7:00 PM with a prayer service at 7 PM Thursday, May 26 at Parkway Funeral Service, 2330 Tyler Pkwy.

Herbert was born on July 7, 1930, the 5th of 13 children, to Emil and Katherina (Landenberger) Preszler in Kidder County on a farmstead about one mile northeast of the current family farm. He attended school at the Wild Rose one-room country school up the road and was baptized and confirmed at Pursian Lake Lutheran Church.

He started working at several neighbors’ farms and Long Lake National Refuge until he saved up enough to buy his first quarter of land. As he built his own farming operation, he also farmed with his dad. He purchased the latest invention: a 4-bottom plow, and his first tractor: a Case; and after that only John Deere as he soon learned that “nothing runs like a deere.” In the early 1950’s a partnership began with his brother, Herman, forming the Preszler Brothers. Later he continued to farm with his son, Terry, and finally with grandsons, Joel and Justin. He saw farming potential in his great-grandsons, the 5th generation of Preszler boys to continue on the family farm.

Farming was not only a career but also a way of life. He loved farming- working the land and harvesting the crop in the fall with his favorite farm equipment, the combine. His favorite part of farming was watching the sunrise in the morning. Herbert said that his generation saw the biggest change in farming as he started with horses progressing to today’s highly mechanized and sophisticated farm equipment.

Herbert met his future wife, Frances Huber, in Napoleon and two years later they were married on November 5, 1951. They were blessed with five children: Karen, Garold (Gary), Terence (Terry), Sheila, and Bonnie; 17 grandchildren and 24 great-grandchildren with two more expected this year. Family was very important to Herbert; he was very proud of his family and loved them dearly. He immensely enjoyed family gatherings especially his annual Father’s Day picnics.

In 1998 Herbert decided it was time to bring all his extended family together and took great pride in planning and organizing a grand reunion held on the family farm in July 2000.

Herbert was active in the Braddock community and Braddock United Methodist Church. He was also a charter member of the Braddock Lion’s Club, member of the Braddock School Board for 17 years, enjoyed time on a local bowling league, and later became a member of the Bismarck Elks Lodge. Herbert & Frances “retired” to Bismarck in 2007, although he continued to spend many days on the family farm. They wintered in Mesa, Arizona for 21 years where he enjoyed golfing in the warm Arizona sun. In recent years, Herbert’s highlight was going to breakfast and visiting with family at Denny’s several times a week.