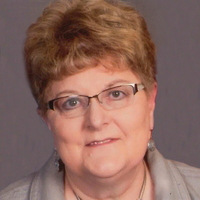 Fran Wick, 75, died May 22, 2022, at her Bismarck home after a courageous three-year battle with Lewy Body Disease.

Frances Helen Link was born May 7, 1947, in Beulah, the daughter of Reinhold and Esther (Lindeman) Link. She graduated from Beulah High School in 1965.

Perhaps in violation of a few child labor laws, Fran, a very mature sixth grader, began working at Galloway’s Super Valu. She seriously considered pursuing a career in nursing, but shortly after graduation was offered a job with the Bank of Beulah, first as a teller and later in the bookkeeping department, and abandoned thoughts of going to college.

In 1972 she decided to spread her wings and moved to Bismarck. After a short stint at the old First National Bank, she was hired by Basin Electric Power Cooperative as an accountant. There she met Doug Wick, and the two were married May 24, 1975, at Zion Lutheran Church in Beulah.

Afforded a chance at early retirement, Fran left Basin in 1998. Typical of newly retired people, Fran found that what she really missed was not the work, but the daily interaction with her coworkers. As time passed, she became involved with at least three distinct groups of ex-Basin people who would regularly meet for lunch. This continued right up to the onset of her illness coupled with the Covid pandemic.

Fran got into volunteering. Most notable was perhaps a stint as the host in the Sanford Hospital Surgery Waiting Room, giving her a taste of what a nursing career would have been. Most bizarre was perhaps volunteering as a host for a national curling tournament staged in Bismarck, a sport of which she knew absolutely nothing. And of course, she would be called to serve in various functions at her adopted home church, Trinity Lutheran.

Early on in her retirement, Trinity realized that Fran was an answer to a problem that had festered for years. Fran became the on-call substitute office manager, which much to her objections was a paid position. She truly enjoyed the times, sometimes for a day, sometimes for as much as two weeks, when she would have the opportunity to get to know more and more members of what is a fairly large congregation. In recent years it became evident that she knew way more Trinity people than her husband, a lifelong Trinity member.

Fran loved crafts. While always dabbling in anything artsy/craftsy, she really got into it after retirement. She tried various things but found her niche designing elaborate homemade cards. She was always a bit surprised to learn that many of the recipients of these cards actually saved them.

She loved to travel. During her 26 years at Basin, her work took her to such places as New York City, Washington, DC, New Orleans, LA, and Wheatland, WY. Away from the job, there were one to three trips each year to Albuquerque, NM, where Doug’s parents had lived since 1968. Other family trips took Fran to both coasts and all sorts of places in between. Fran and Doug shared the driving. Most memorable was a 4,000-mile journey in 2016. Fran’s share of the task was a one block jaunt in downtown Brookings, South Dakota, when Doug noticed a second antique shop just up the street. While never quite getting the opportunity for foreign travel beyond Canada and Mexico, she would ultimately visit every state but Alaska and Mississippi.

Fran loved sports. At first, it was mostly the Minnesota Twins. Fran attended about one-hundred Twins games over the years, with some at all three of their stadiums and one when the Twins were the visiting team in Detroit. At home Doug, Fran and Scott probably watched about 75% of all Twins televised games, an activity that became one of their most cherished family traditions. So who was her favorite all-time Twin? Rick Aguilera. Aguilera was indeed a solid, reliable pitcher for many years, most notably as the Twins trusted closer during their 1991 championship season, but unlike the Twins all-time great players, he is almost certainly never going to be in the Hall of Fame. So why was he Fran’s favorite? Each and every time he would come in from the bullpen to pitch, Fran would just gush over how good looking he was! Doug accepted this.

When Scott became a student manager for the Century High School boys’ basketball team in the mid-1990’s, this was added to her must-do list. For three years, Fran was in attendance at nearly every CHS game, both home and away. This included a weekend, where due to a weather postponement, Century played one night in Belcourt and the next night in Spearfish, S.D. When one of Scott’s friends and teammates was recruited to play at the University of Mary this became another must-do event. For twenty plus years, Fran was a regular at both CHS and UMary basketball games, an activity that again only ended with her illness and the Covid debacle.

Fran loved music. Possessing a fine alto singing voice, she limited her vocalizing to high school choir and her church’s congregation hymns. She loved going to concerts. Over the years, these ranged from several of Trinity’s annual productions of the Handel’s “Messiah” to a plethora of pop stars, such as Kenny Rogers, Elton John, Olivia Newton-John, the Oak Ridge Boys, the Beach Boys, and Scott’s all-time favorite, Neil Diamond. Sadly missing was one of Fran’s favorites, Andy Williams. The stars just never quite aligned to allow for the opportunity to attend one of his concerts in Branson or wherever. Perhaps it has already happened, but let’s hope and pray that Andy might give Fran a personal serenade in heaven.

Through all this, the constant focus of Fran’s life was her family. For 47 years, she supervised her eccentric husband. For 44 years she gave her son the 24/7 care required for his special needs that only a woman with her consistent, conservative, and Christian values could do. This was also true for her extended family, co-workers, friends and neighbors. She was a rock, the stabilizing force and matriarch wherever she went. She will be so terribly missed.

Fran is survived by her husband, Doug; son, Scott; and brother, Bob (Linda), Northwood, Iowa. While from a small family, Fran’s parents were from large families. Thus, Fran leaves a wealth of cousins, many of whom she thought as brothers and sisters.

She was preceded in death by her parents, Reine and Esther Link; and her in-laws, Glen and Lucy Wick.

Funeral services will be held 11 a.m. Friday, May 27 at Trinity Lutheran Church, 502 N Fourth St., Bismarck. Visitation will be held one hour prior at the church. A service livestream will be available on the church’s website: https://trinitybismarck.com/funeral-livestream/